Richard Pollock on October 31, 2016 at The Daily Caller News Foundation 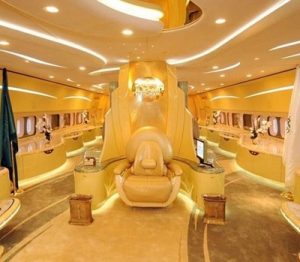 Ira Magaziner, the CEO of the Clinton Health Access Initiative, asked former President Bill Clinton to thank Morocco’s King Mohammed VI for “offering his plane to the conference in Ethiopia.”

“CHAI would like to request that President Clinton call Sheik Mohammed to thank him for offering his plane to the conference in Ethiopia,” Magaziner gushed in a November 22, 2011 email released by WikiLeaks.

Clinton frequently has expected free, luxurious private jet travel during his post-presidential life. Clinton, his wife and daughter have artfully secured free air travel and luxurious accommodations since they left the White House.

It’s an effective way to accept gifts of great value without declaring them for the Clinton Foundation.

In the Moroccan case, Clinton was able to fly for free, jetting 3,367 miles from Rabat, Morocco, to Addis Ababa, Ethiopia on the King’s specially equipped 747-400 jumbo jet.

Clinton was traveling to attend a conference organized by Sheikh Mohammed Hussein Al-Amoudi, an Ethiopian-Saudi billionaire who is the second wealthiest man in Saudi Arabia. The sheikh has donated up to $10 million to the Clinton Foundation.

But neither the Clinton Foundation nor CHAI have listed any “non-cash contributions” — such as free jumbo jet travel — on their 2011 tax return for the free use of the aircraft.

Clinton also stayed in 2014 at a five-star hotel in Jaipur, India on official Clinton Foundation business and stayed in a $13,900 per night villa — which was not itemized on the foundation’s tax returns.

There are a large number of other free trips and expensive perks Clinton and his family have enjoyed, many from foundation donors.

Vinod Gupta, former CEO of InfoUSA, was sanctioned by the Securities and Exchange Commission for using company assets – such as cars, yachts and luxury vacations – without approval from the board or any other authorized party. He was later fired and fined $9 million.

But Gupta also gave “Clinton and his family” $900,000 worth of free air travel on the company jet, according to the SEC.

One free Gupta trip in 2002 was for Bill, Hillary and Chelsea Clinton to fly free to Acapulco, Mexico for a family vacation, according to a New York Times report.

Another InfoUSA jet ride was for Democratic nominee Hillary Clinton to travel to New Mexico that cost $18,480. A group called “Friends of Hillary” paid a paltry $2,127 for the trip.

Gupta has contributed up to $5 million to the foundation, according to the Clinton Foundation.

The Saudi Crown Prince in 2004 — now King Abdullah bin Abdul Aziz — gave Clinton his personal Boeing 767 to fly with 20 of his best friends to Davos, Switzerland to attend the annual global gabfest led by the world’s business kingpins, according to Joe Conason, a Clinton supporter and author of the new book “Man of the World.”

The Saudi king has donated more than $25 million to the Clinton Foundation.

The former president has flown on Ron Burkle’s private jets through Central Asia, India and China, and Clinton pocketed $15 million to be a part of Burkle’s Yucaipa Partners hedge fund.

Perhaps the most notorious freebie flights were when Clinton flew 26 times on the private jet owned by sex offender Jeffrey Epstein. His aircraft, dubbed the “Lolita Express,” was supposed to be equipped with a bed for sex with underage girls. On at least five occasions, Clinton dumped his Secret Service detail for the flights, according to Fox News.