– UtahPolicy is part of an elite business group that is dedicated to maintaining its exceptional influence over public policy in Utah.

– Governor Gary Herbert is fully aligned with the policy elites. He frequently adopts their policies as his own, speaks in favor of them and opposes anything that runs counter to the elites’ programs. In return, the elites support Herbert up and help ensure that he remains in office.

– These elites coordinate their efforts to influence policy makers and public opinion through a range of websites, front groups, carefully crafted polls and other tools.

– When discussing public policy in Utah, it is important to recognize that policy elites use every tool at their command to achieve the results they want. Any pretense of objectivity is just that – a pretense. 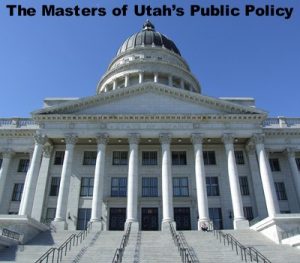 Bob Bernick, Contributing Editor of UtahPolicy.com, claims that his organization’s polls, which are frequently funded by Zions First National Bank, are more objective than those conducted by organizations that have “taken a stand on a public policy issue.”

In both cases, the UtahPolicy polls were designed to get a pre-determined outcome that supports Governor Herbert’s position which just coincidentally happens to be that of the Salt Lake Chamber and other public policy elites that it coordinates with. In return for his support for their positions and willingness to kill or veto bills that they oppose, Herbert retains their strong financial support and campaign backing which he acknowledged when he told a group of lobbyists, “I’ll just say, I’m available. I’m Available Jones.”

A closer look at UtahPolicy reveals the role it plays in the elite group of individuals and interlocking organizations that have not only taken a stand on public policy issues but more importantly, are dedicated to maintaining their control of public policy in Utah.

These elites coordinate their messaging and use a range of websites, front groups, carefully crafted polls and other tools to push their common agendas.

UtahPolicy’s mission is “to help leaders in the Utah Public Policy Industry obtain those skills and insights, save time and perform their jobs better.” UtahPolicy is joined at the hip with UtahPulse.com which is produced in collaboration with Zions Bank. Zions Bank is a major funder of UtahPolicy’s polls.

LaVarr Webb is also the founder of the Exoro Group, a political consulting group that proclaims: “We deliver success.” Among Exoro’s clients are Zion’s Bank, UtahPulse, the Salt Lake Chamber, UtahPolicy, the Utah Foundation, Intermountain Healthcare, Utopia and USTAR.

Zions bank’s UtahPulse.com lists UtahPolicy as one of its partners. Other UtahPulse partners are the Governor’s Office of Economic Development, Salt Lake Chamber of Commerce, the World Trade Center—Utah where Zions president and CEO, Scott Anderson serves as Chairman of the Board, USTAR which Anderson once championed and chaired and where LaVarr Webb continues to play a role, and Mountain West Capital Network (business networking organization). But perhaps its most important partner is the powerful and ubiquitous Salt Lake Chamber with its chairman, Lane Beattie.

Zions’ President/CEO Scott Anderson has been a member of Prosperity 2020’s Business Executive Leadership Council. The Salt Lake Chamber and Prosperity 2020 are listed as partners of Education First Utah , a “citizens group” organized as a state PAC, dedicated to improved accountability, innovation, and [taxpayer] investment for education in Utah..

In addition, the Salt Lake Chamber created another front group, the Utah Mobility Coalition, to focus on long-term taxpayer funding and planning issues related to Utah’s mobility infrastructure and appointed the Chamber’s former executive vice-president and general counsel, Robbin Riggs, to lead it.

The Coalition also supports “fully funding the prioritized needs identified in Utah’s Unified Transportation Plan and other strategic projects. This includes supporting solutions to address the remaining funding shortfall of nearly $8 billion by 2040 to address capacity expansion, maintenance and operations of our state’s significant transportation assets.”

The Coalition’s members include tax consuming (governmental) entities and the major construction and other transportation oriented companies in Utah that benefit directly from taxpayer funding of transportation projects. Consequently, they support increasing the sales tax which falls primarily on Utah families since businesses are largely exempt from that tax. The Coalition’s Director, Abby Albrecht, has a Salt Lake Chamber business address, e-mail address and phone number.

In April 2013, LaVarr Webb of UtahPolicy wrote: “I work with the Utah Mobility Coalition, sponsored by the Salt Lake Chamber, so I am involved in a variety of transportation issues.” He then moved on to work with the Utah Transportation Coalition. Webb writes articles supporting the Chamber’s position on transportation issues that appear on both the Salt Lake Chamber and Exoro websites. In the past, the UtahPolicy articles have been posted on the Chamber ‘s website as a blog or other item.

On the health care front, the Chamber favored a “measured approach” to Medicaid expansion and worked to gather support for Governor Gary Herbert’s effort which would allow Chamber members to transfer certain of their health care costs to the taxpayers. The Chamber sponsored a survey designed to show strong public support for the Governor’s “Healthy Utah” plan and the Chamber uses another front group, the Health Systems Reform Task Force, to push its agenda.

Another Chamber front group is the Downtown Alliance which is headed by Chamber EVP, Jason Mathis. Since 2008, Mathis has served as both the executive director of the Alliance and executive vice president of the Salt Lake Chamber. The Downtown Alliance is “dedicated to building a dynamic and diverse [Salt Lake City] community that is the regional center for culture, commerce and entertainment.”

Mathis has also headed the Chambers’ efforts to obtain amnesty for illegal aliens and for the Chamber members who unlawfully employ them. Mathis was named a Champion of Change by the Obama Administration for helping get the Chamber’s pro-amnesty, Utah Compact in place.

The Chamber also relies on the United Way to front many of its initiatives including support for the Governor’s Medicaid expansion proposal. Deborah Bayle, who served as the President and CEO of the United Way, was a former Chamber Chief Operating Officer.

“State government is a critical partner in furthering our work and achieving our goals. Despite the committed efforts of Utah’s nonprofit organizations and the generous support of Utah’s private sector and religious communities, our resources alone cannot achieve long-term community-level change. Public sector partnerships and [taxpayer] investments are also needed in order to achieve lasting solutions to the challenges our communities face.”

Another member of the public policy oligarchy is the Utah Foundation which “promotes a thriving economy, a well-prepared workforce, and a high quality of life for Utahns by performing thorough, well-supported research that helps policymakers, business and community leaders, and citizens better understand complex issues and providing practical, well-reasoned recommendations for policy change. Zions bank is a Platinum Level Sponsor. Zions has a seat on the Board of Trustees as does the Salt Lake Chamber (Heidi Walker) and UtahPolicy (LaVarr Webb).

Given the above, it is somewhat disingenuous for UtahPolicy’s Contribution Editor, Bob Bernick, to argue that UtahPolicy’s polls are the gold standard in terms of objectivity. In the case of Medicaid expansion, the Salt Lake Chamber unquestionably had a dog in the fight and a clear cut agenda.

According to its website at the time, “The Chamber had been working closely with the Utah Hospital Association, Chamber members and others to gather support for the Governor’s effort.” In fact, still according to the Chamber’s website: “The Salt Lake Chamber in collaboration the Utah Hospital Association, American Cancer Association, AARP of Utah, Voices for Utah Children and Utah Health Policy Project, sponsored a phone and email survey to better understand the public’s sentiment of the Governor’s “Healthy Utah Plan.” That poll was conducted by Dan Jones, Utah Policy’s “objective” pollster and the result was that 70% favored the governor’s plan

Earlier, in 2014, two members of the Chamber’s Health System Task force, published an op ed in the Salt Lake Tribune. In it, the president of the Leavitt Partners Consulting and the President/CEO of HealthInsight asserted that “Our community will be healthier and financially stronger as we use available federal dollars to provide health care for the poorest among us” and they concluded that the legislature should adopt Governor Herbert’s Medicaid expansion proposal. In addition, they testified in favor of the Governor’s plan before the legislature’s Health Care Task Force.

Thus, Bernick is simply not accurate when he argues that “The Sutherland Institute has taken a stand on a public policy issue – Medicaid expansion. And its poll results show that position is favored by most of those surveyed. UtahPolicy and Jones have no position on Healthy Utah, and we believe our survey best reflects the real opinions of Utah voters.”

And just like the “Healthy Utah” poll, the UtahPolicy poll on concealed firearms is not without bias. In fact, it was done by posing a simple question with no explanation, “Should Utahns be allowed to carry a concealed weapon in public without obtaining a permit?” According to UtahPolicy, “75 percent of Utahns “definitely” or “probably” say that adults in the state should not be allowed to carry a concealed weapon unless they have a state permit to do so.”

However, when KSL reported on the UtahPolicy poll and gave both sides of the issue, its online poll question which read: “Do you support being allowed to carry a concealed weapon in public without a permit?“ resulted in 69% of respondents favoring concealed carry without a permit and only 28% opposing as of November 24, 2016.

Therefore, when discussing public policy in Utah, it is important to recognize that policy elites are totally united and they use every tool at their command, including front groups and polls, to influence policy makers and public opinion. Any pretense of objectivity is just that – a pretense.

Steal our Stuff!
Utah Standard News is deeply committed to restoring government oversight through non-partisan journalism. In order to provide top-quality news coverage and investigative work to your readers, our work is free for print, radio, broadcast and digital media to republish with appropriate attribution.

Media Requests or Partnership Inquiries
We have a growing nationwide network. If you’re interested in learning more about our work or receiving regular content from our reporters please contact our Director of Communication and Media Outreach at ed@utahstandardnews.com.org.

The articles from our ‘Friends’ are under copyright and are published with permission. Any republishing of these articles is STRICTLY PROHIBITED without written consent from the Publisher.

Comments - 2 Responses to “WHO CONTROLS UTAH? An Investigative Report on the Elite”