The Masters of Utah’s Public Policy have launched a coordinated and well financed initiative to raise Utah’s personal income tax by 18% while leaving the corporate income tax unchanged.

In a previous column, I pointed out that Salt Lake Chamber, UtahPolicy and the Utah Foundation are all part of an elite that is dedicated to maintaining its exceptional influence over public policy in Utah.  I also noted that these elites coordinate their efforts to influence policy makers and to get public opinion behind their initiatives through a range of websites, front groups, studies, articles, carefully crafted polls and other tools. 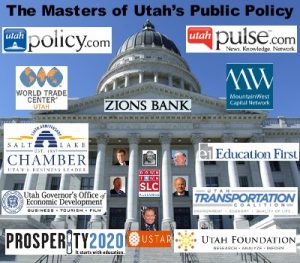 These policy elites and their fellow-travelers have now determined that individual Utahns are not paying enough income taxes and are threatening to put an individual income tax increase on the ballot if legislators do not raise the state’s personal income tax.  Of course, the policy elites are not proposing raising the state’s corporate income tax which would impact their businesses nor are they proposing to given back any corporate welfare they are receiving.

This is the same scheme that was used to upend the caucus system in Utah and it is led by many of the same elites who blackmailed the legislature into giving them largely what they wanted in that case.

The first shot in this effort to raise individual income taxes by a whopping 18% from 5% to 5.875% while leaving all business taxes, including the 5% corporate income tax, unchanged was fired when the elites formally announced a petition drive to raise the individual income tax.  That was accompanied by the creation of yet another Salt Lake Chamber front group, Our Schools Now (OSN).

Shortly after that announcement, UtahPolicy’s Contributing Editor and propagandist, Bob Bernick, put out his first article in support of the tax initiative.  In the article titled, Bob Bernick’s Notebook: Who Will Oppose a Tax Hike for Schools?, Bernick asserts that “Utahns, today, pay less of a percent of their personal income for public schools than they did 20 years ago – a total of $1.8 billion.”

Bernick’s source of information is a Utah Foundation report.  The Utah Foundation derives its funding from major business sponsors who also sit on its board along with members of many tax consuming entities.  In return for their money, the Utah Foundation produces studies that are directly linked to and that either directly or indirectly support the policy elites’ initiatives.  Bernick, of course, encourages everyone to read the Foundation’s agenda driven report.

Bernick then writes that “…it will be interesting to see who comes forward to oppose this tax hike petition.  Who will say our schools are doing fine as they are, and our kids don’t need more money into a system that is overstrained, overcrowded, and where too many children don’t get the individual attention they need to succeed in the classroom.  Who will be the face of the Grinch who stole our children’s future?”

He then asserts that a “[forced] political compromise may be sought by conservative GOP lawmakers who [when threatened by the policy elites’ initiative] don’t want the 7/8th to hit all at one time: Some kind of phase-in income tax rate hike that automatically takes place over several years.  That could blunt the OSN petition movement (and save its backers upwards of $1 million – the cost of running a successful statewide petition drive)…. But the OSN folks are smart, they have big money behind them, and they have the force of a citizen tax hike movement in their hands.

What Bernick is talking about sounds a lot like blackmail—either the legislature will do what the Masters of Utah’s Public Policy want or they will suffer the consequences.   But since blackmail worked once before when it came to the caucus system, the Masters will not hesitate to use it again in order to get the individual income tax increase they want while ensuring that their businesses do not pay a penny more in taxes to fund education in Utah.

This is typical of the greedy, self-serving Masters of Utah Public Policy—Do what directly benefits themselves and their cronies while forcing the average citizen to pay for it.

Steal our Stuff!
Utah Standard News is deeply committed to restoring government oversight through non-partisan journalism. In order to provide top-quality news coverage and investigative work to your readers, our work is free for print, radio, broadcast and digital media to republish with appropriate attribution.

Media Requests or Partnership Inquiries
We have a growing nationwide network. If you’re interested in learning more about our work or receiving regular content from our reporters please contact our Director of Communication and Media Outreach at ed@utahstandardnews.com.org.

The articles from our ‘Friends’ are under copyright and are published with permission. Any republishing of these articles is STRICTLY PROHIBITED without written consent from the Publisher.