This is the first in a series of articles on proposed legislative reforms. The series looks at five categories of reforms:  1) ending Washington style politics, 2) improving transparency, 3) upholding the legislators’ oath of office, 4) controlling government spending and growth, and 5) enhancing citizen participation.

According to observers of the legislature, Washington style politics are alive and well at the Utah State legislature. Professional, high paid lobbyists have ready access to legislators due to a constant flow of money, invitations to special events and campaign assistance. Lobbyists openly talk about how many legislators they have brought into the legislature, how they kill bills that they disapprove of, and of their high success rates in getting bills they support passed.

Lobbyists often have both the personal and taxpayer paid-for cell phone numbers of legislators so they can call and text them at all times. Lobbyists help draft legislation and then orchestrate its passage. Powerful chambers of commerce and taxpayer funded, government associations organize carefully controlled and scripted weekly meetings with the legislative delegations from Wasatch-front counties where they tell legislators how they want them to vote on key legislation.

As in Washington, controversial legislation is all too often rushed through by heavy handed legislative tactics without giving the public or legislators time to read it or to analyze it. In these cases, leadership may even threaten legislators who oppose bills they support with a wide range of sanctions. Legislative oversight of the executive branch and other entities that taxpayers fund is largely ignored as legislators rush to pass literally hundreds of bills in a short, forty-five calendar day session.

– No health insurance or retirement pay for part-time, citizen legislators.

– Give the public and legislators time to read and review all bills.  All too often legislative leadership resorts to Washington style politics on the most critical issues in order to steam-roll unpopular bills through the legislature or to provide benefits for special interests.

During the 2011 session, the legislature rammed through HB477 which impacted the citizens’ right to information without full vetting.  In that case, the public outcry that occurred forced the legislature to quickly repeal the bill.

Likewise, legislative leaders passed HB116 in the dead of night using parliamentary tricks, without full vetting and under great pressure from extremely powerful and influential lobbyists who were camped out in the House and Senate restricted areas.

HB116 has subsequently been described as Utah’s unconstitutional illegal alien amnesty bill that is designed to provide a captive, illegal alien workforce for employers and to relegate illegal aliens to little more than involuntary servitude.

Republican delegates to the state Republican Convention and a number of county conventions disavowed the action of the legislature and called on Republican legislators to repeal and replace HB116; however, powerful pro-illegal alien elements came to the defense of the bill and it is still on the books.

– More oversight; fewer Bills.  Legislators spend most of their time dealing with up to eight hundred new bills without reading or really understanding most of them.  They spend far too little time ensuring that existing laws are either needed or repealed.  Billions of dollars are allocated with little or no follow-up resulting in $13 million dollar payouts in highway contract disputes, corruption in state run liquor stores and the misappropriation of funds by the bureaucracy.

Action.  Ensure that substantial time is set aside for the oversight of government operations and the implementation and enforcement of existing laws.  This will result in fewer bills passed, good laws being more effectively enforced and bad laws repealed.

Under no circumstances should legislators qualify for the public employees health insurance program, either while serving or for the rest of the lives once they have completed ten years in office, nor should they receive a defined benefit retirement based on years of service. This encourages Washington style career politicians and results in elected officials being treated better than those who elect them

The next column in this series will examine ideas for enhancing transparency in the legislative process.

To find out who your state Representative and state Senator is, click on this link and enter your street address and zip code in the space provided. When their pictures pop up, you can find their e-mail address and phone numbers by clicking on the name below the picture.” 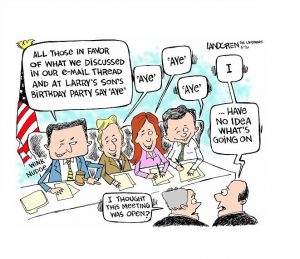 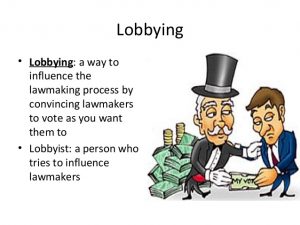