Trump Promotes More Jobs for Americans … at the UN 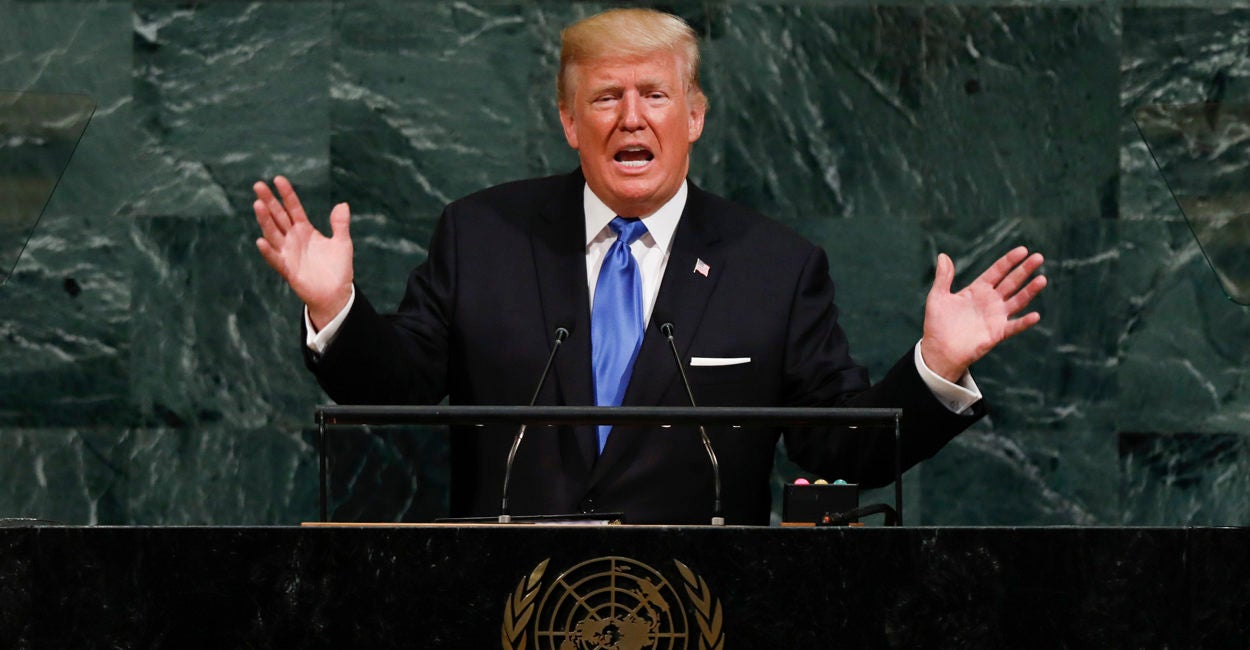 President Donald Trump, speaking here Sept. 18, 2017, to the United Nations General Assembly in New York, seeks to increase the number of U.S. citizens working at the world body based on its own rules. (Photo: Xinhua/Sipa USA/Newscom)

The Trump administration is trying to secure more jobs for American citizens in the United Nations bureaucracy, as a recent State Department report finds woeful underrepresentation even though the United States contributes more to the world body than any other government.

The U.S. funds almost one-quarter of key U.N. agencies, and their staffs play a key role in implementing international policy on health, aviation, labor, and security. However, the U.N. hasn’t made a good faith effort to hire Americans under existing rules, according to a State Department report obtained by The Daily Signal.

The report, sent July 3 to members of Congress, asserts that five U.N. agencies aren’t abiding by their own rules on providing geographic representation among employees, which would require more Americans. As of last year, 739 American citizens worked in these five agencies among a total of 7,126 employees, according to the State Department.

With the advent of the Trump administration, the State Department began moving to reverse the long-running trend, which Congress first tried to deal with through legislation in 1991.

That legislation required the State Department to report to Congress on whether international organizations are making “good faith steps to increase the staffing of United States citizens and has met its geographic distribution formula.”

“In 2017, the department implemented a multi-year strategy framework to address declining [American] representation in the U.N. and U.N. system,” the State Department report says. “To reverse this decline, the framework aims to develop organization-specific strategic plans that establish annual performance targets for U.S. representation at each organization.”

While the problem isn’t new, the Trump administration is taking a bigger interest in it than previous administrations, said Brett Schaefer, a senior research fellow for international regulatory affairs at The Heritage Foundation who writes often about the U.N.

The Government Accountability Office issues periodic reports to Congress on the relatively few Americans who work at the U.N., citing several reasons.

One reason, according to the GAO’s most recent report, in 2010, is that U.N. jobs are more sought after by citizens of developing countries, while Americans could find more desirable employment. The GAO found a decrease in Americans working at five key U.N. agencies from 2006-2009, stating:

Challenges include Americans’ lack of proficiency in U.N. languages, difficulty for spouses to obtain employment in some locations, lengthy hiring processes, and limited opportunities for promotion and professional growth. For example, 45 out of 63 Americans we interviewed identified the lengthy hiring process as a challenge to recruiting and hiring.

While these U.N. organizations have initiated human resource reforms that may address some of the issues, such as efforts to decrease hiring time, it is too early to determine their impact.

Most of these issue persist today, Schaefer said, adding that U.N. internal politics are also a roadblock.

“It’s not entirely the U.N.’s fault, but the U.N. could make the hiring process less onerous and tedious and more transparent,” Schaefer said.

The sprawling U.N. bureaucracy includes several levels of employment, including executives in major policymaking roles, generally vetted by the U.S. presidential administration, and professional, midlevel jobs where the Trump administration wants to improve U.S. representation but would not be directly involved in hiring.

A third level not addressed by the State Department and GAO reports includes support jobs such as maintenance workers and security guards, staff overwhelming drawn from a local area such as New York or Geneva.

The United States pays between 22 to 28 percent of most U.N. agency funding, and paid a total of about $10 billion for the U.N. and connected entities in 2016, according to the State Department.

“Countries that provide more resources generally have more nationals employed by U.N. organizations than countries who pay less, some organizations have explicit rules on this while others do so informally,” Schaefer added.

A State Department press office employee told The Daily Signal several times over the past week that the department was working on providing a statement for this story, but by Friday evening did not have a comment.

The July 3 cover letter to members of Congress, written by Charles S. Faulkner, an official with the State Department’s Bureau of Legislative Affairs, says the plan “proposes to reverse the declining trend.”

However, the report found that the Food and Agriculture Organization was the only U.N. agency exhibiting a “good faith effort” to ensure representation from the United States. U.S. personnel in calendar year 2017 increased by 1.5 percent from calendar year 2016, according to the report.

The Food and Agriculture Organization saw a slight increase of U.S. employees from 106 in 2016 to 133 in 2017, according to the report. However, the other three U.N. agencies with rules for geographic hiring posted a decline of U.S. personnel, albeit less than 1 percent.

The U.N. Secretariat, the executive arm that sets the agenda for the U.N. General Assembly and other major bodies, also posted a 6.7 percent increase in hiring U.S. citizens.

The agriculture agency so outpaced others in U.S. citizen staffing that it was the only U.N. agency where the number of Americans who turned down job offers at least equaled the number of hires needed to increase U.S. representation.

The State Department report is not specific regarding the new policy, but goes on to say that “to execute this strategy” would involve “working closely with the organizations to compel them to take proactive steps to increase U.S. citizen staffing.”

Within these plans, organizations highlighted the outreach efforts they are currently undertaking, or will undertake, to recruit American professionals. Further, in response to the department’s year-end staffing data request, organizations provided details about CY 2017 outreach initiatives taken that were specific to hiring U.S. nationals. The department analyzed action plans and staffing data to assess current outreach efforts in place to target and attract qualified American candidates, and to identify both best practices as well as gaps in these efforts.