Switcharoo Poolooza – Concerning the Moab Democrat running as a Republican

Yesterday I received an alarming phone call from a friend in the Grand County Clerk’s office. A very prominent (local) progressive-liberal Democrat named Ashley Korenblat had just registered as a Republican and submitted her intent to run against Carl Albrecht for Utah House of Representatives District 70. Admittedly, my first reaction was to laugh and insist this must be an early April Fools joke. I was assured it was not. 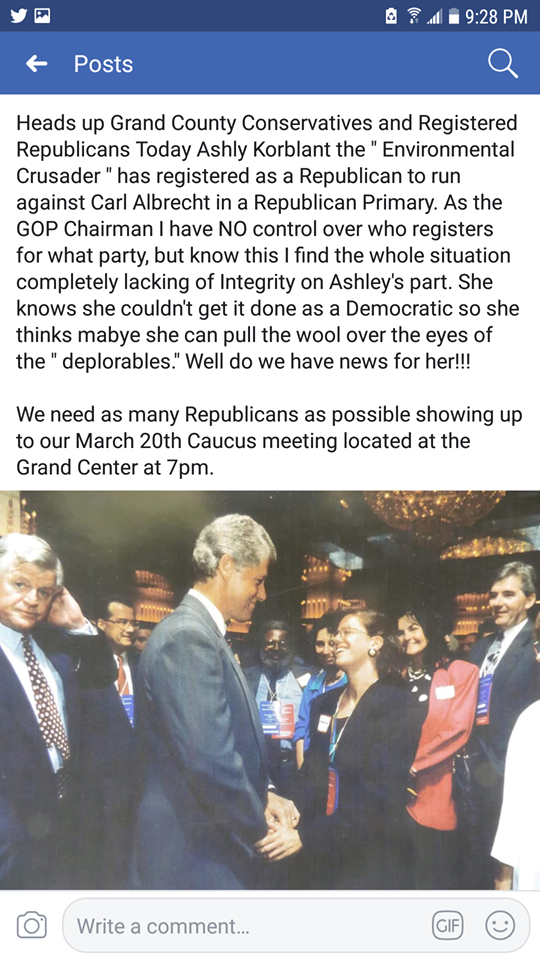 I called Ashley’s place of business (Western Spirit Cycling) to hear it straight from the source. An hour later, Ashley returned my call. I asked Ashley if she had just registered as a Republican to run against Carl in the Republican primary for District 70.  Ashley’s reply was “Indeed I did.

Dumbfounded, my next question was “Why?”. Her response was ” This route makes the most sense.” I then asked her to explain why. She then went on to tell me that she knew that she couldn’t win as a Democrat, but she wanted to bring her ideology to the State level and that this was the most effective way to do that.

I then challenged her, saying “Ashley, you have never been a Republican in your life. I would call you a RINO, but the inks not even dry.” Her response was to laugh. I proceeded to list several of the party platforms. I asked her how she felt about free-trade, limited government, and even her stance on abortion. Ashley chuckled and said that she doesn’t agree with everything, obviously, but she does support economic recreation.  I asked her how that makes her a Republican, and she said “Well, I think I will bring a moderate voice.” She then went on to talk about how she has worked with the BLM, National Parks, and the Governors Recreational Economic board. After a little back and forth, I told her that one good thing will come out of this: You will embolden and fire up the conservative base. She laughed and said “We’ll see. If I make it or don’t make it.”

If you’re wondering who Ashley Korenblat is, she is the owner of Western Spirit Cycling in Moab, Utah.  She is also the managing Director of the NGO ‘Public Land Solutions’. She is an avid recreationist (as long as your recreation is Mountain Biking and Cycling). If you do a quick google search of her, you will see her name attached to nearly every single article about the MLP, as well as her involvement in City/County affairs, pushing her limited recreation agenda.

I firmly believe that this move to register as a Republican and run in a Republican Primary is simply ” the ends will justify the means ” mentality and it shows a lack of integrity and moral stability on the part of Ashley Korenblat much like the people she has rubbed shoulders wh in the not so distant past.

For the people that want to know the “scoop” on what’s going on with the Republican party in Utah…watch this video. Sexual allegations, making divorce records public, etc. Bateman released an audio clip of Utah Senator Todd Weiler pressuring a female employee into falsely accusing Bateman of sexual harassment. Watch this video for the whole story: Utah Senator Todd Weiler Attempts to Extort Me

In Senator Todd Weiler’s message he says his attorney friend “can get your friend a million bucks if she doesn’t go to Europe”. He was telling Bateman’s former girlfriend not to go on a trip with him, because going on the trip would prevent her from bringing sexual harassment claims against Bateman. If Weiler and his very “connected friends” have a million dollars to throw around why is Dave Bateman paying off the party’s debt and not the party elites?

Weiler was pivotal in passing SB 54, Count My Vote. Might I a share a small thought?  Anyone who speaks against the “powers that be” gets attacked. RICO or the Racketeer Influenced and Corrupt Organizations Act should be invoked. There is not just collusion but conspiracy. The FBI should be all over this. I’m dying to hear what will happen criminally with this. Please let someone be held accountable for this kind of evil.

Jennifer the UTGOP Chair of Salt Lake County, held her ground and disallowed signature gathering at their caucuses. She is being attacked from every angle for this decision. No other chair has ever stood up like she has yesterday. Orrin hatch’s handler has called Jennifer Jensen and left a message for her to call him on her phone. Hatch will likely threaten to pull out of the Lincoln Day dinner if this is not allowed.

Off The Cliff – Disgracing Behavior at the Legislature

Last night,  I saw a clip from the last night of the Utah legislative session. This was right around the time that they passed a $1 BILLION tax increase over the next 10 years, and every year after. In the video, the legislators sing a song, making fun of the leaders of their own party, the State Central Committee members. SCC members were mocked and ridiculed by our elected officials for their efforts to fight against SB54 and enforce UTGOP rules and bylaws. This would have been more appropriate in some underground pub during “Happy Hour”.Instead, it took place in the Chambers of our State Capitol

Reps. Webb, Redd, Potter, and Peterson (The Cache County Boys…and that other guy) sing a post-legislative roast version of the Beatles classic Come Together. Hilarity (if you are a geeky politico) ensues.

The husband of one SCC member stated “From what I understand (someone please correct me if I’m wrong), not a single legislator stood up and put a stop to it, or called them out for their behavior. In my opinion, that is a disgrace. They are so high and mighty that they can sit back and make fun of the people sacrificing their time and money for their communities.”

It’s embarrassing. Not a single legislator believed that was inappropriate? Or, at least not one had the guts to say so. These arrogant SOB’s are thinking they can get away with mocking liberty, as the redcoats did with the Colonialists with”Yankee Doodle.” This was disgraceful. UnFreakin unbelievable. Does anyone think this was appropriate?

Many of the Caucus notification signs are not being placed in neighborhoods by precinct chairs. Causus supporters are doing it themselves.

Just like Rocky,  @Chris Herrod has at least one more round left. Unlike Rocky, Chris can win this last one! You may recall that Herod was defeated when a life-long democrat, John Curtis forced a Republican primary. Hopefully,it will turn out different this time. In case you missed this:

Joni Crane – It’s All About Her

The state party Vice-chair has filed as a candidate for Uintah County Commissioner A, against two Republicans candidates. When will she resign? http://co.uintah.ut.us/candidates.php

If anyone isn’t sure who buckshot is…(which you all probably are) there is a post from a while back where the person posted screenshots of members. The ones who have been in for 3 years in the screen shots seem to be the main offenders. But she posted lots of references about them and what they are up to before they went secret. https://www.facebook.com/groups/210732079060530/permalink/1044187059048357/

For more background on the “Buckshot Caucus”, Kerry Pipkin posted this in the Utah Republicans – UnOfficial Group 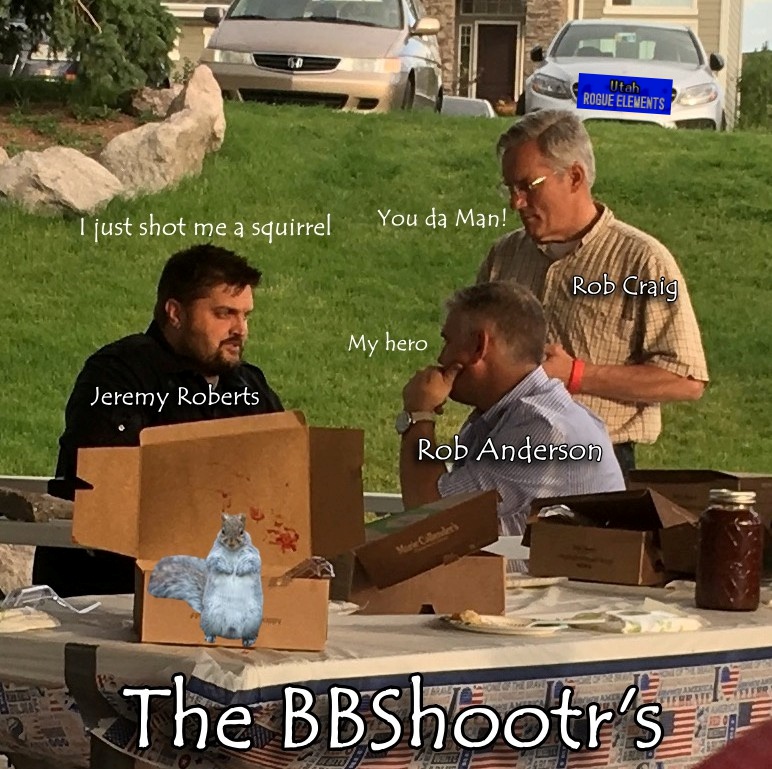 “Many members in the Utah Big Tent Republican group are loyal followers of Carl Downing, CMV and the group behind it. Some members are simply being fooled thinking they are part of a big open discussion, yet are being fed a lot of propaganda.. I’ve posted many things in there and they get deleted by the admins (Carl Downing, Chad Pritchard (loyal follower of Carl) or John Mullholland). Here is a snapshot of what Carl said:

“It does lean slightly pro CMV but no one will be greatly disappointed with any outcome in November, we’ve been there and done that in politics, just give us a system and we can and will cope with it.”

False- It leans heavy CMV. And there was a system (the Caucus system) and they WON’T cope with it. (they want it gone)

True- Buckshot caucus was not created by CMV. Buckshot helped CREATE CMV along with Mike Leavitt, Gail Miller and others and helped to promote it while pushing SB54 as a compromise (which it wasn’t). But since they were pushing SB54, people thought they were looking out for them (which they are not). SB54 had a non-severable clause in it while they presented it to the State Central Committee (SCC) (which the party thought they could win some points in court and have the whole thing thrown out) so they agreed. Then…….surprise!….some unscrupulous Senators removed the non-severable clause right before they passed it and we have been in a legal battle ever since.

CMV wins because they played a psychological game of war with the delegates and specifically the SCC, fire a shot at them and watch as they destroy the system from within as they eat the party alive.

This is what they want. They planned it. This is why he’s “been right 100% of the time” (so far)…..but they will lose because people are waking up and learning the truth and people are rising up to get the slime out of the Utah Capitol. Now is the time to fight. I think these guys will come unglued soon, they are being exposed”.”

A video has emerged of a illegal recorded of a closed SCC meeting.