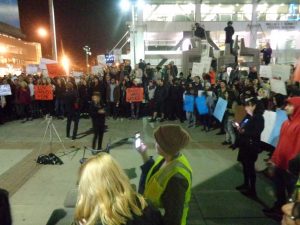 On November 10, 2016, following an hour of speeches, more than a thousand people took over State Street in Salt Lake City and eventually marched to the capitol where they burned the American flag.  The following are the words of the speakers and the crowd chants at the November 10th rally and March in Salt Lake City.

I am Theresa Nielson part of Freedom Road Socialist Organization– a revolutionary socialist [and Marxist-Leninist] organization that fights for working class liberation for all oppressed nations both inside and outside of the United States.  We need to start mobilizing against Trump.  Change doesn’t happen in the voting booth, it happens in the street.  You can’t just vote for change because we live in an oppressive situation.  Lots of us are scared by what’s coming in the next four years and that is completely valid because of what Trump says.  He viciously threatens Latino and Muslim people.  He is a rapist and sexual harasser and is against the working class.  However, we are not here to just talk about Trump.  We are here to talk about the way forward and how we are going to fight back.  Democrats are not going to save us.  Under Obama two million people were deported and Hillary would have done much of the same with even more aggressive action in the Middle East.  The way to bring justice and equality is to organize – sustained organizing.  We need to continue organizing since we are living in a monopolistic capitalistic society.  The Labor movement, Chicano movement, etc.  brought about progress.  We need to create a movement that can build a society for the people – “People Power” (chant).

Other speakers “who are fighting for a better community” included the following. 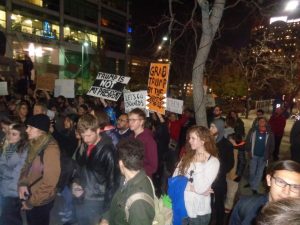 Carly Haldeman, is an active member of Freedom Road Socialist Coalition and Utahns Against Police Brutality.  According to Ms. Haldeman, Cops don’t protect us, they protect the white elite.  The police were originally created to be slave catchers.  More than ever we need you guys to be organized and we need to keep fighting.  We are pushing for a civilian review board for police.  We want to put cops in their place.  This is real concrete power that we are pushing for.  We want a democratically elected board to determine who is policing us and even if they are qualified to police us.  Abdi Mohammed was shot in the back, where is the f**king bodycam footage.  (Chant:  “Release that footage.”)  This was cops attempting murder.  We are living in a comply or die society.  Chant:  “Comply or die is not the way.”  We don’t need any more incompetent Democrat or Republicans to be our voice.  We can’t afford this anymore.  The review board would have the right to subpoena material, to fire cops and not put them on paid leave.  We don’t want more excuses and false promises with no action.  We need District attorneys who actually serve justice.  (Chant: “F**k that.”)

Were running a campaign for Abdi Mohammed and giving it all we’ve f**king got.  We have to stop the police from policing the police.  There can be no more police protecting each other and covering up evidence.  We meet every other Wednesday.  We are going to turn this into legislation.  I need you all to have our back and to show up because under Trump the police are going to get worse because he is going to protect them.  Chants:  “F**k Trump” and “Hey, Hey, Ho, Ho.  The killer cops have got to go.”

An 18 year old, young woman also addressed the crowd.  I can honestly say that I have never been more frightened for the people of this nation, she said.  Trump has promised to make American great again by throwing us back over the border, sending the Syrian refuges home, told African Americans that their lives don’t matter and told the community that represents 14% of the American population to go back to Africa.  There has been a documented uptick in violence against African Americans and in police brutality since Trump became a candidate.  The people are scared because we have a racist, bigot in office.  When will people wake up.  46.9% of eligible voters didn’t even vote.  That’s why we are here today, to do something.  She then read a quote from Malcom X calling for justice and equality by any means necessary and said that we want it now! 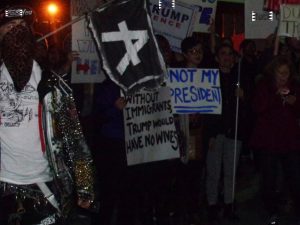 Cristobal Villegas, national delegate for Bernie Sanders asked, Who said enough is enough, No human is illegal, Let’s get money out of F**king politics”  It was Bernie Sanders.  The Democrat party let us down (crowd boos the Democrat party).  My message is that it’s ok to feel anger and to march, but tomorrow and the years to come need to see all of you involved in your city, school board, etc.  Trump got here because we did nothing for years and if we don’t do something the old white man will keep doing what he has been doing for centuries.  If we are not where the decisions are made they will make them for us so get involved in your local politics now.

Speaker from the Anti-discrimination Task Force.  Chant: “Dump Trump.”  We already have a struggle and the silver lining of Trump’s election is that we know we need to get active now.

Adrian Romero, an immigration and LGBT rights activist.  Romero started off by asking people to chant, “Undocumented, Unafraid” and “Queer lives matter.”  She said that she was a member of Utahns against Police Brutality and Students for a Democratic Society (SDS).  She explained that she is a Mexican immigrant and a member of the working class.  She was brought to US in 1997 when she was just 2 years old.  Her parents worked two jobs so their kids would be safe and have a good life.  My parents are upset because I am here, she said.

She continued, by saying that, I think about all the people whose lives are about to be destroyed.  I think about the suicides since the election, of the violence against Muslims and the LGBT community.  This country was not built for people like you and me and now is showing the true face behind the mask.  I want you to organize and resist (Chant: “Organize and Resist.”)

Good luck with Democrats helping fight back.  I am with the people.  It is up to us to keep our community safe and informed.  Don’t wait for the people on the hill because they aren’t doing anything.  It’s up to the people, we are the working class.  Trump promised that on the first day 11 million people will be deported.  (Crowd:  “F**k Trump.”)  Pence promises to abolish all LGBT rights.  They are raising a war against Muslims, queer people, disabled, etc.  Those who think Trump will help the working class are wrong.  “Dump Trump” chant led by Romero.

We will only take back our own rights through revolution.  We will not allow people to be harassed.  Protect your friends, your families, people you don’t even know.  Make sure everyone knows what their rights are.  When ICE comes to your door, because I can guarantee you that it is going to start happening, don’t let them in unless they have a warrant.  (Crowd chants:  “Don’t let them in.”)  If they have a warrant they can hold it up to the window and until then they are not allowed in the house.  Do not let them in, do not comply.  In addition to protecting friends and family, encourage people to protect themselves and empower people.  You can get involved by attending meetings, organizing, etc.  (Crowd:  “To the Street.”)

Sean Taylor, a member Students for a Democratic Society at the University of Utah.  .  Fight the Trump agenda of racism, sexism, etc.  Education is a right.  To that end we make demands on campuses and we win.  We are fighting for equality and justice.  We are against the racists who are against undocumented people.  We are fighting institutionalized oppression.  We believe in true democracy – people fighting for the people and in organizing, standing up and fighting back.  (Crowd:  “Stand up, fight back.”)  Taylor also told the crowd that SDS helped organize theanti-Trump rally when Trump was in Salt Lake City.

A Native American.  We are not against the law, we just want clean water.  I’ve never been free in this country.  For me they’re all terrorists.  I don’t know about you but I’m ready for a revolution (huge cheer).  I am fighting for human rights.  (Chant:  “Standing Rock.”)

Gabriella Killpack, Teamsters Local 222. I’m here today because we all deserve more than society offers us.  I believe in a beautiful new world and we are the ones to bring it into existence.  All of you will help make it happen.  I will see you at future demonstrations and strikes.  Many of us are working class with low wages, no health insurance and no job security.  I am proud to be working class and to be in the Teamsters Union.  Trump wants to kill unions, lower the minimum wage and we won’t have that, we will be a force to be reckoned with.  We don’t beg for more but we will stand united and demand it.  When people organize together like we are doing here we can accomplish anything.  We’re all going to stay together.

Warm up chants prior to the speeches and taking to the streets.

“Give Trump hell, its right to rebel”

“When (insert word) is under attack what do we do?  Stand up, fight back.”

“The people united will never be defeated.”

Without Immigration Trump Would Have No Wife

No Room for Racism

Grab Trump by the Pussy

We Will Not be Silent