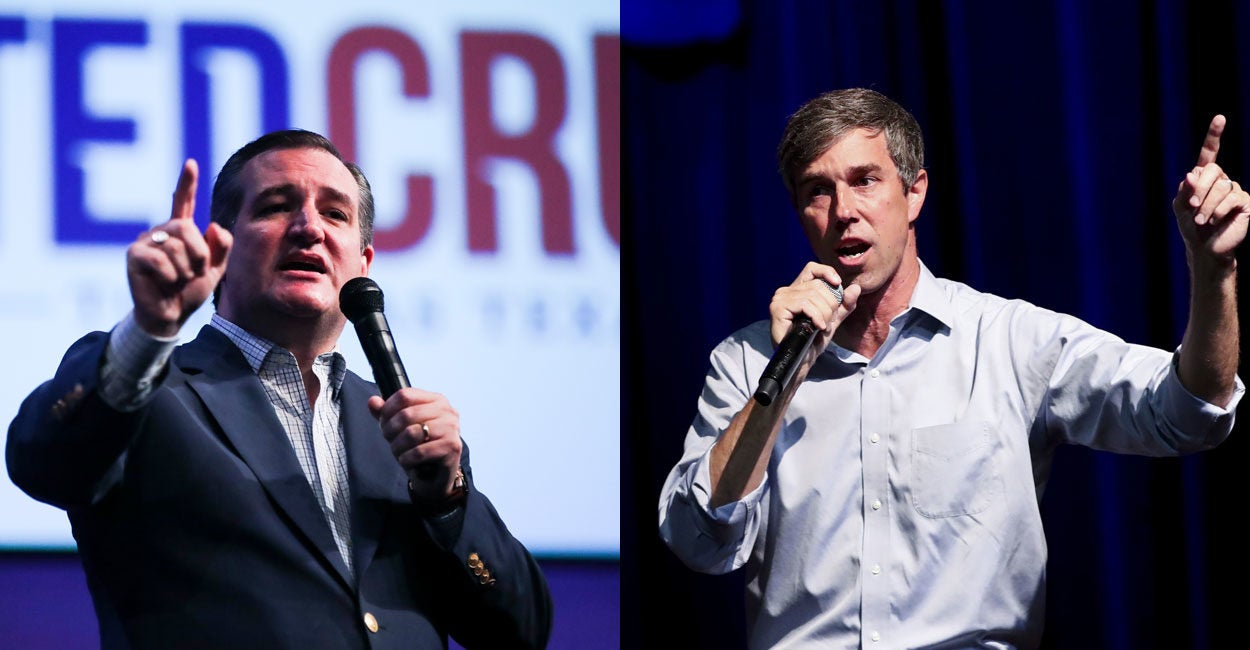 Ted Cruz, the incumbent Republican senator from Texas, narrowly defeated Beto O’Rourke, the Democratic challenger, in one of the most closely-watched midterm elections of 2018. (Photo: Xinhua/Sipa USA/Wang Ying/Newscom)

It wasn’t the blockbuster night Democrats were hoping for.

The blue wave fell far short of some of the major wave elections of the past decade.

In Tuesday’s midterms, Democrats claimed a majority in the House of Representatives for the first time in eight years—but their electoral gains were muted by significant Republican gains in the Senate.

“This is not a blue wave,” CNN’s Jake Tapper said while watching early election results come in. What transpired looked more like a blue ripple.

In the Senate, Republicans solidified their thin majority, with Sen. Ted Cruz  of Texas defending his seat in a high-profile race against Beyoncé-endorsed Rep. Beto O’Rourke. Florida Gov. Rick Scott defeated Democratic Sen. Bill Nelson in one of the most important swing states in the nation, and Missouri Attorney General Josh Hawley ousted two-term Democratic Sen. Claire McCaskill, thanks to what many consider the “Kavanaugh effect.”

Historic voting trends suggested Republicans would lose the House. According to Gallup, the president’s party “almost always suffers a net loss” in the House during an off-year election.

While those lost seats will be consequential—producing gridlock and new oversight investigations—historically speaking, the night could have been far worse for the incumbent party in power.

For instance, the first midterm election under President Barack Obama in 2010 was a major electoral defeat for Democrats. Republicans gained 63 seats in the House of Representatives and six seats in the Senate while making significant gains in state houses and gubernatorial elections.

The balance of power shifted Tuesday night, but not as drastically as Democrats had hoped.

There are some things money can’t buy. The Senate, it appears, is still one of them. Republican Ted Cruz held onto his Senate seat in his hotly contested race against Democrat Beto O’Rourke, who raised a historic amount of campaign cash.

The Center for Responsive Politics estimated the 2018 midterm elections in sum cost a record-breaking $5 billion. Leading in the bank was O’Rourke, who raised an astonishing $70 million. Of that, $53 million came from ActBlue, a nonprofit that enables Democrats to raise money via crowdsourcing.

Overall, the Senate race in Texas cost over $100 million, with Cruz raising another $40 million. Cruz successfully defended his seat, but the race was a nail-biter. With 92 percent of precincts reporting, Cruz had just over 51 percent of the vote, while O’Rourke had 48 percent. That is unusually close for Texas.

While both sides would likely agree that money still matters in midterm elections, it was not the decisive factor in Texas.

It was a rough night for red state Senate Democrats who voted against the confirmation of Supreme Court Justice Brett Kavanaugh.

Sen. Joe Manchin, D-W.Va., was the only Senate Democrat who voted to confirm Kavanaugh. He narrowly defeated his opponent, West Virginia Attorney General Patrick Morrisey, in a state that President Donald Trump won overwhelmingly in 2016.

But a significant number of Senate Democrats up for election from states that Trump won in 2016 went down in defeat.

KAVANAUGH MATTERED: Four of the "Big 5" vulnerable Senate Democrats lose or losing tonight: Donnelly, Heitkamp, McCaskill, Nelson. All four voted against Kavanaugh. The one that did vote for Kavanaugh, Joe Manchin, prevails.

One of the reasons we are winning big in the Senate tonight is because of the way Democrats treated Brett Kavanaugh. #FACT

According to the Associated Press, the Kavanaugh issue had a particularly big impact in North Dakota.

“[I]n North Dakota, where Republicans picked up a seat that helped them hold onto control of the Senate, voters concerned about Kavanaugh broke toward the GOP by about 2 to 1,” according to AP VoteCast, which is a national survey of the electorate.

A number of young, progressive stars went down in defeat despite receiving significant national attention.

O’Rourke of Texas was the most prominent defeat, but there were others.

Andrew Gillum, who gained notoriety for his stridently progressive views, lost to Rep. Ron Desantis in the Florida governor’s race.

And Stacey Abrams, who received an endorsement from Oprah, trailed Georgia’s secretary of state, Brian Kemp, in the governor’s race, though she vowed to keep pushing for victory in a runoff election.

With Democrats now taking the House for the first time in nearly a decade, staking their fortunes on resistance to Trump, it is now an open question who will become the face of the next generation of progressive leaders.

Suffice it to say, celebrity endorsements were one of the biggest losers of the midterms.

It appears Americans like Hollywood’s music, movies, and TV shows, but not their politics. Celebrity endorsements didn’t push candidates over the finish line. If anything, they may have done the opposite—urged the “forgotten” people to show up.

Good Morning! You’ll find some of today’s top stories in the comments of this pic. Visit our site for full coverage at UtahStandardNews.com.