Rage. And Hate: Inside the Mind of a Virtue Signaler

The following are excerpts from Ten Reasons Why I Am No Longer a Leftist, a 2014 piece written by Dr. Danusha V. Goska. I thought of Francinepink’s niece, and all of the other virtue signalers out there as I read it.  It was recently republished on Watts Up With That as “a primer on the hatred of climate skeptics.”

There’s nothing here you do not already know but it serves as a useful reminder that what we are dealing with is an emotional distortion of reality which makes it harder to beat back with facts. The hyperbole of hysteria does not respond well to reason. I’m sure any of you who’ve tried to “discuss” such issues with a committed leftist believer knows this; the “discussion” usually ends in an angry huff when the leftist realizes they’ve been cornered with facts and resorts to name calling.

I wish I knew the solution but if decades of lousy results aren’t enough to repudiate the politics of the Left I don’t know what will. Possibly results? A Trump presidency that Makes America Great Again?  Maybe that’s why, as you read the article, you will  note how it could as easily serve as a primer explaining the hatred directed at Trump as well.

Here are the top 10 reasons (greatly abbreviated) for Dr. Goska’s about turn: 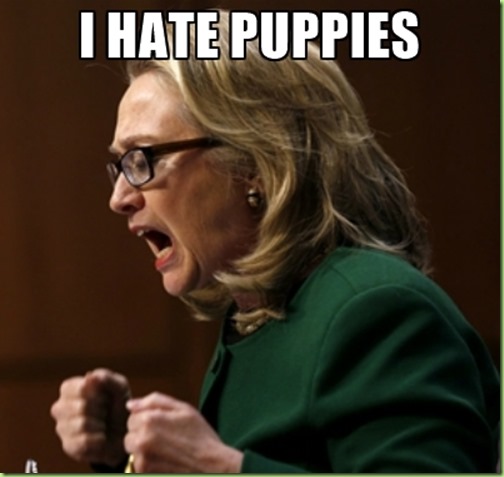 I felt that I was confronting the signature essence of my social life among leftists. We rushed to cast everyone in one of three roles: victim, victimizer, or champion of the oppressed. We lived our lives in a constant state of outraged indignation. I did not want to live that way anymore. I wanted to cultivate a disposition of gratitude. I wanted to see others, not as victims or victimizers, but as potential friends, as loved creations of God. I wanted to understand the point of view of people with whom I disagreed without immediately demonizing them as enemy oppressors…

I was an active leftist for decades. I never witnessed significant leftist outrage over clitoredectomy [just another culture’s rite of passage], child marriage, honor killing, sharia-inspired rape laws, stoning, or acid attacks. Nothing. Zip. Crickets. I’m not saying that that outrage does not exist. I’m saying I never saw it.

The left’s selective outrage convinced me that much canonical, left-wing feminism is not so much support for women, as it is a protest against Western, heterosexual men. It’s an “I hate” phenomenon, rather than an “I love” phenomenon.

The Reclusive Leftist blogged in 2009 that it was a “major shock” to discover “the extent to which so many self-described liberals actually despise working people.” The Reclusive Leftist focuses on Vanity Fair journalist Henry Rollins. Rollins recommends that leftists “hate-fuck conservative women” and denounces Palin as a “small town hickoid” who can be bought off with a coupon to a meal at a chain restaurant.

Hang out in leftist internet environments, and you will discover a toxic bath of irrational hatred for the Judeo-Christian tradition…You will discover a nihilist void, the kind of vacuum of meaning that nature abhors and that, all too often, history fills with the worst totalitarian nightmares, the rough beast that slouches toward Bethlehem.

“Truth is that which serves the party.” The capital-R revolution was such a good, it could eliminate all that was bad, that manipulating facts was not even a venial sin; it was a good. If you want to make an omelet, you have to break a few eggs. One of those eggs was objective truth.

I went to hear David Horowitz speak in 2004. My intention was to heckle him. Horowitz said something that interrupted my flow of thought. He pointed out that Camden, Paterson, and Newark had decades of Democratic leadership…My students have learned to focus on the worst thing that ever happened to them, assume that it happened because America is unjust, and to recite that story, dirge-like, to whomever is in charge, from the welfare board to college professors, and to await receipt of largesse…“In a slum an exploiter is better than a Santa Claus… An exploiter forces you to react, whereas a Santa Claus demobilizes you.”

Given that the left prides itself on being the liberator of women, homosexuals, and on being “sex positive,” one of the weirder and most obvious aspects of left-wing hate is how often, and how virulently, it is expressed in terms that are misogynist, homophobic, and in the distinctive anti-sex voice of a sexually frustrated high-school misfit.

Comments - No Responses to “Rage. And Hate: Inside the Mind of a Virtue Signaler”