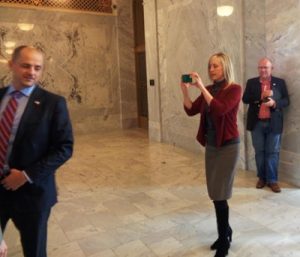 “Rick Wilson is with us. Are you?  It’s never too late to do the right thing,” reads the invitation to join the Evan McMullin-Mindy Finn campaign.  “America deserves much better than either Donald Trump or Hillary Clinton can offer us.”

If that is the case, then why are McMullin and Finn associating with Republican, establishment political strategist, Rick Wilson who has a history of demeaning others and going on obscene Twitter rants, the very thing that McMullin and his supporters profess to find so abhorrent in Trump?

A review of Wilson’s past comments shows disdain for Ted Cruz, a visceral hatred of Trump and his supporters, foul language and filthy, demeaning comments to a woman.  A sampling of Wilson comments going from the benign to the vulgar includes the following:

On Ted Cruz:  it would have been a much more effective argument if he [Cruz] hadn`t been Trump`s fan boy until yesterday. (MSNBC: Chris Hayes Program)

“They’re [GOP donor class} still going to have to go out and put a bullet in Donald Trump,” Wilson said. “And that’s a fact.” (MSNBC, Chris Hayes Program)

Now, the screamers and the crazy people on the alt right as they call it, you know, who love Donald Trump, who have plenty of Hitler iconography in their Twitter icons.  (MSNBC: Chris Hayes Program)

Trump supporters are post-rational.  He can eat a baby and they’ll think it’s the greatest thing. (From @OutFrontCNN.@TheRickWilson)

There is a difference between being not PC and being a giant, epic, douche canoe.  (CNN:  Don Lemon Program)

Go f*** yourself.  I don’t give an f*** about what people say about me, but bring my kids into it and there is going to be trouble.  (From @TheRickWilson to @Voxday)

I seriously could not give less of a f*** what you say about me….” (From @TheRickWilson)

It has been said that “the type of people you surround yourself with speaks of your values” and that “We tend to become like those whom we admire.”   Given McMullin and Fiinn’s embrace of Wilson, what values and moral principles do they really stand for and admire?

Wilson is more than an acquaintance. “The people who drafted McMullin to be the “Never Trump” independent candidate are some of the Republican establishment’s most well-known operatives: Bill Kristol, John Kingston, Joel Searby, Rick Wilson.” Castle is a great choice but still a vote for Hillary.

Copyright Statement and Policy:
1. The author of each article published on this web site owns his or her own words.
2. The articles from our ‘Friends’ are under copyright and are published with permission. Any republishing of these articles is STRICTLY PROHIBITED without written consent from the Publisher.
3. The articles on this web site MAY NOT be redistributed in a commercial publication or other media without written consent from the Publisher and/or Author. The Publisher and/or Author may request compensation for republication for commercial uses.

Please contact USN at ed@utahstandardnews.com for more information or requests.