by Spencer Irvine on November 16, 2016 at Accuracy in Media 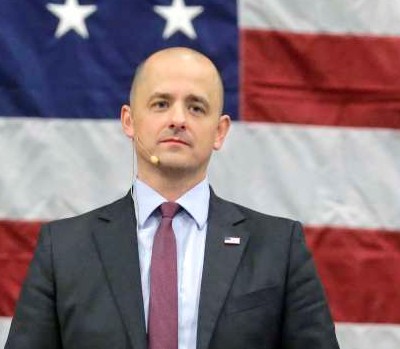 McMullin’s plan was to provide a conservative vision for America, one built on strong national security and a robust foreign policy. He also was pushing a message of unity, echoing the legacy of Ronald Reagan. He named Mindy Finn, a prominent female Jewish conservative activist, as his running mate, and had the financial backing of neoconservative establishment Republican Bill Kristol, who is in charge of The Weekly Standard magazine and is often on ABC News as a contributor.

In October, an Emerson College poll announced that McMullin took the lead in the state of Utah with 31% of the vote. Trump was second at 27% and Clinton 24%. McMullin voters and the media pounced on the news and believed Utah could vote for a third party candidate for the first time in its history. A red state had not gone blue, but third party. This added to speculation that if McMullin won Utah, , and the vote between Clinton and Trump was so close that neither would win 270 electoral votes, the presidential vote could go to the House of Representatives and McMullin could conceivably be voted as president of the United States.

However, the media quickly moved on from the story and the McMullin campaign gained momentum. The fact remained that in a subsequent Emerson College poll, McMullin was not within earshot of Trump when Trump took the lead on November 3rd with 40%, compared to  McMullin’s 28%.

Other polls, ranging from the local Salt Lake Tribune to Heat Street/Rasmussen to Monmouth, did not put McMullin ahead of Trump in the few weeks before Election Day. Trump’s polling numbers did not dip below 32% in seven different polls conducted after the Emerson College poll in October. Yet, there was little-to-no liberal media coverage of this polling trend in favor of Trump.

But, on election night, McMullin quickly surged to second place in the state of Utah before finishing third with 21% of the vote, behind Democratic Party nominee Hillary Clinton who had 28%. The state stayed red, and although McMullin briefly challenged Trump, it wasn’t close at all in the end.

McMullin’s concession speech was a plea for a new conservative movement and to not let the momentum or the movement die. But, some questions remain: What are the changing demographics of Utah? Is another conservative insurgency on the horizon in four years for the next presidential election? Time will tell.

This article is republished with permission from our friends at Accuracy in Media.