This post will be my final concerning the events in Utah County. It includes evidential screenshots, some updated info, Facebook activity, and my commentary.

I’ve been told that there was a protest letter sent, and an investigation has been started into the Special Credentialed delegates. This is a good start and does provide some protection for Saturday’s caucus. HOWEVER, investigations should happen for ALL of the improprieties stated in the first YAK article, particularly those that involve wrongful delegate replacement, after the deadline replacements, delegates voting twice, and delegates representing precincts they don’t live in. Utah County, that is up to you.

Some people are making the argument that this stream of events is hurting the caucus system. Here are a few exchanges made AFTER the publication of the second article.

Jon Stanard This article, as the one before it, is driving nails into the coffin of the caucus system. Honestly, as a legislator who has supported it fully for many years, I am really struggling right now. How is this still the best system if it is as bad as these claims make it out to be, and if the people involved are really acting this way (on both sides). If your Goal is to move to full signature gathering route, it might be working. This might be the worst silly season I have ever seen in Utah. I’m just glad it’s not my district and I’m not involved with any of it. Good luck and good riddance.

Ed Wallace Jon Stanard The last thing I want to see is the destruction of the caucus. Instead of looking at this as the driving nails, why not just see the opportunity to strengthen it? This system has either been abused and manipulated, or plagued by incompetence for years. There are holes everywhere. There’s no oversight or mechanism in place to prevent what’s happening. The party needs to man-up and take a look at itself. Right now, it is it’s own worse enemy. There’s no stored knowledge and little reaching out. This is not a good time to have a steep learning curve. Mistakes are going to be made and have been made. One mistake the party should not continue to make is to keep steering away from conservative values. I believe that the leadership of the party is trying to save the party just so there can be a party. Instead of the currant fixation on their $400,000 debt bringing the Utah Gop close to bankruptcy, they should be concerned about the process and moral bankruptcy, and lack of adherence to their platform and conservative values. The money will come, but when the party loses the integrity of it’s process, then the whole reason for having a caucus convention system tanks. Then, who cares what party you’re in at that point? Why even have a party?

Ed Wallace Simply put, we either have rules and morals or we don’t.

Sean Nielsen We blame the system when it is the party at fault.

Ed Wallace Sean, I partially agree. There has to be a better job filling the holes and purifying the process. Ultimately, it’s the ability and character of the people involved that will determine success. A thief will always find a way to evolve and get past the alarms. We need to evolve with them.

Heather Zahn Gardner This argument that anyone who questions election irregularities is killing the Caucus/ Convention system is a common tactic used. If you ask to review records or see the data you “don’t trust the Caucus/Convention system.” https://twitter.com/a_oldika/status/728981100194725888 Expand and read this twitter thread after my contesting the election in Senate District 23. The state party was gong to destroy ballots and we retained an attorney to review them. What ensues was a firestorm on twitter of opponent (elected official), county party officer and buckshot members attacking me for following delegate requests to review our election ballots, check in sheets and irregular delegate numbers. If you want to tighten the ballot and delegate irregularities or the system of credentialing you are “driving the nails in the coffin” Don Guymon had loose ballots in his election as well. How do we improve the system if we can never look at the data and the procedures without relentless online backlash?” END of Facebook.

In addition to Jon Stanard’s comment about ‘more nails in the coffin, Carl Downing tweeted the same words. I find it interesting that some politicians and party leaders, share the same feeling. This has to make me suspect that those who are crying about hurting the caucus system MAY be among those who would like it to be destroyed.

In my opinion, it could be fair to say that anyone who doth protest this and any of these revelations, before or after this article post, may be part of the problem, part of the cover-up and/or RINO establishment, may be using this as a vehicle to destroy the caucus system, OR, might be so inept and unaware of the world around them, that they should be removed from ANY leadership or public position and sent to pasture.

The following are SOME of the screenshots taken from the Utah State & Utah County GOP.

Good Journalism requires time, expertise, passion and money. We know you appreciate the coverage here. Please help us to continue as an alternative news website by becoming a subscriber or making a donation. To learn more about our subscription options or make a donation, click here. To Advertise on UtahStandardNews.com, please contact us at: ed@utahstandardnews.com. 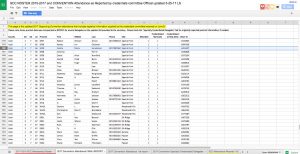 Deidre Henderson Signing in to Convention for SF08 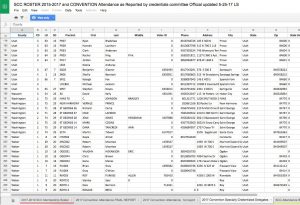 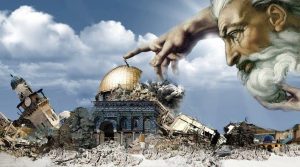