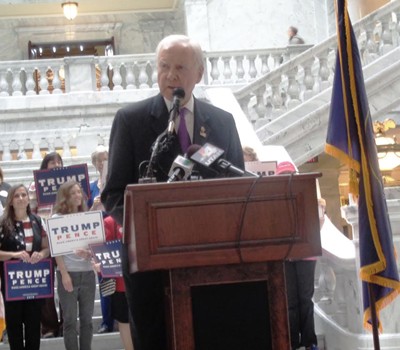 The following is a summary of the remarks of each of the above.

Don Peay of Utahns for Trump said that Trump would “drain the [corrupt Washington] swamp” and credited Trump with broadening the Republican base.  This included having Peter Thiel, the openly gay co-founder of PayPal and a Silicon Valley billionaire, speak at the Republican convention.  Peay criticized Clinton for standing by while Americans died in Benghazi and said that “if our kids are on a mission in a foreign land and need help, Trump will go get them.”  He concluded by reminiscing about some of the great BYU football teams and pointed out that Jim McMahon was far from perfect but that he led BYU to many victories and that Trump would do the same for the United States.

Retired Air Force General and former LDS General Authority Robert Oaks said that Donald Trump is prepared to be Commander-in-Chief and that Clinton is not.  He clearly stated that “No local paper speaks on behalf of the Church.  The brethren are careful when they put out their words and they don’t come from a newspaper.”

Congressman Chris Stewart originally endorsed Trump then withdrew his endorsement following release of the 2005 Access Hollywood video.  He recently said that he would vote for Trump.  He acknowledged going through a difficult process in deciding who to vote for but said that it was now time for Republicans to come home and to rally around the party’s nominee because the future of the country hangs in the balance.

Stewart reminded those present that he sits on the House Intelligence Committee and has read the top secret e-mails that were found on Clinton’s personal e-mail server.  He said that these e-mails constituted a “grave danger” to national security and that they even revealed the names of human assets.  Stewart concluded by saying that the next President’s Supreme Court nominees will change the nation forever.  If for no other reason, this is why people should support Trump.

Cherilyn Eager, a former Republican Senate Candidate, argued that Trump is the moral choice for Utah voters.  Referring to Phyllis Schlafly, she said that Utahn’s are not voting for Pope but for President.  According to Eager, “McMullin is stealing votes from the moral choice and giving them to the crooked choice.”  Eager said that the mainstream media has been exposed and brought down by Trump who is the “wrecking ball we’ve needed.”  She then asserted that Trump has occupied the high moral ground by his pro-life, anti-abortion stance, by naming his choices for Supreme Court, etc.  Clinton on the other hand won’t defend religious liberty but she will support unlimited abortions, sell out American jobs, support open borders with crime and drugs flowing into the United States, etc.  Eager concluded by asking whether Utahns want a corrupt Hillary Clinton or Donald Trump who will drain the [Washington] swamp.

Enid Greene Mickelsen, a former Republican party official and Congresswoman, said that State Republican Party Chair James Evans had asked her to tell Republicans that “they have to come home.”  She said that she “gets” what is on the Trump tape but loathes what Bill Clinton has done to women and what Hillary has done to destroy of the lives of the women who came forward after being abused by Bill.  Furthermore, “Hillary has been lying to us for over two decades.”

Mickelsen considered voting third party when the Access Hollywood tape came out because Clinton was so far ahead that it didn’t matter.  However, with the race tightening up, now it matters so Republicans no longer have the luxury of voting for someone just so they can go home and tell their friends and neighbors that they didn’t vote for Trump.  Greene concluded by saying that “This election is too important to stand up and say, I’m not going to vote for him because of something he did ten years ago.”

Congressman Rob Bishop said that “It’s not about Trump’s past.  It’s about our future.”  There are only two realistic choices for President Clinton or Trump.  Utah is not a swing state so it is important for it to remain in the Republican column.

Utah State Representative Jake Andregg explained why he withdrew his endorsement of McMillan and voted for Trump.  Three weeks earlier he had written an Op Ed supporting McMullin.  Two weeks ago he stood behind McMillan along with other legislators during a press conference at the Capitol.  When McMillan started criticizing the electors [in the House of Representatives] that was it for Andregg because McMullin has based his campaign on a deadlocked election which the House will decide.  “You do not win their votes by criticizing them,” Andregg said.  Andregg concluded by saying that Utah needs a partner in the White House and Trump is the only one who will be that partner.

Speaker of the Utah House of Representatives Greg Hughes spoke with five former Speakers standing behind him.  Hughes talked about the “shy” Trump voters who whisper “I’m for Trump.”  He said that “we don’t have more time for shy” and that Trump supporters need to be start talking to their friends and neighbors.  According to Hughes, Trump and his supporters are in this for the “little guy” as opposed to the Washington establishment that the other candidates represent.  If Trump wins and looks out for the little guy there will be all kinds of positive changes.

Senator Orin Hatch said that Trump doesn’t take “crap” from anybody and that’s exactly what we need after the mess we’ve been given in past years.  We have to turn this mess around.  Those who really know Hillary know that anybody but her must be elected President.  There is no more important issue than who is going to decide who the judges are going to be and “It better not be Hillary Clinton” since the next president will appoint four and perhaps even five Supreme Court justices.  Hatch continued, “I believe that Evan McMullin is a very nice man but a vote for him is definitely a vote for Hillary.  We cannot waste our votes—especially in this election.  We have to get out and vote for Trump.”

Hatch also said that Trump is no choir boy but “I’ve seen a change in him since he started running.  He is a good man and if you don’t believe me, look at his kids.”  Hatch ended his presentation by saying that he loves this country and the Constitution.  “Let’s make sure we elect Donald J. Trump.”

Hatch then read a statement from Utah Attorney General Sean Reyes who could not be at the press conference.  Reyes began by joining James Evans and the Trump campaign in condemning anti-McMullin robo-calls by William Johnson, the leader of the white nationalist American Freedom Party.  Like Hatch, Reyes emphasized that the selection of judges is the most critical element of this election since “the decisions we make at this time will impact our posterity for generations to come.”

After Hatch completed reading Reye’s statement, he reiterated that this is the most important election in our history.  “We need to get out with our neighbors,” Hatch said.  “I have seen Trump evolve and he has risked a lot for this for the country.  All we have to do now is get out and vote.  Utah needs to set the example for the nation.”