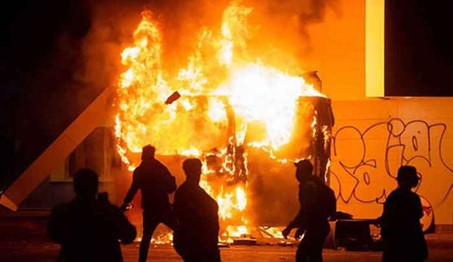 “Revolutions are often seen as spontaneous. It looks like people just went into the street. But it’s the result of months or years of preparation. It is very boring until you reach a certain point, where you can organize mass demonstrations or strikes. If it is carefully planned, by the time they start, everything is over in a matter of weeks.” Foreign Policy Journal

Does anyone believe the nationwide riots and looting are a spontaneous reaction to the killing of George Floyd?

It’s all too coordinated, too widespread, and too much in-sync with the media narrative that applauds the “mainly peaceful protests” while ignoring the vast destruction to cities across the country. What’s that all about? Do the instigators of these demonstrations want to see our cities reduced to urban wastelands where street gangs and Antifa thugs impose their own harsh justice? That’s where this is headed, isn’t it?

Of course there are millions of protesters who honestly believe they’re fighting racial injustice and police brutality. And more power to them. But that certainly doesn’t mean there aren’t hidden agendas driving these outbursts. Quite the contrary. It seems to me that the protest movement is actually the perfect vehicle for affecting dramatic social changes that only serve the interests of elites. For example, who benefits from defunding the police? Not African Americans, that’s for sure. Black neighborhoods need more security not less. And yet, the New York Times lead editorial on Saturday proudly announces, “Yes, We Mean Literally Abolish the Police–Because reform won’t happen.” Check it out:

We can’t reform the police. The only way to diminish police violence is to reduce contact between the public and the police….There is not a single era in United States history in which the police were not a force of violence against black people. Policing in the South emerged from the slave patrols in the 1700 and 1800s that caught and returned runaway slaves. In the North, the first municipal police departments in the mid-1800s helped quash labor strikes and riots against the rich. Everywhere, they have suppressed marginalized populations to protect the status quo.

So when you see a police officer pressing his knee into a black man’s neck until he dies, that’s the logical result of policing in America. When a police officer brutalizes a black person, he is doing what he sees as his job… (“Yes, We Mean Literally Abolish the Police–Because reform won’t happen”, New York Times)

So, according to the Times, the problem isn’t single parent families, or underfunded education or limited job opportunities or fractured neighborhoods, it’s the cops who have nothing to do with any of these problems. Are we supposed to take this seriously, because the editors of the Times certainly do. They’d like us to believe that there is groundswell support for this loony idea, but there isn’t. In a recent poll, more than 60% of those surveyed, oppose the idea of defunding the police. So why would such an unpopular, wacko idea wind up as the headline op-ed in the Saturday edition? Well, because the Times is doing what it always does, advancing the political agenda of the elites who hold the purse-strings and dictate which ideas are promoted and which end up on the cutting room floor. That’s how the system works. Check out this excerpt from an article by Paul Craig Roberts:

The extraordinary destruction of white and Asian businesses in many instances wiping out a family’s lifetime work, the looting of national businesses whose dumbshit CEOs support the looters, the merciless gang beatings of whites and Asians who attempted to defend their persons and their property, the egging on of the violence by politicians in both parties and by the entirely of the media including many alternative media websites, shows a country undergoing collapse. This is why it is not shown in national media. Some local media show an indication of the violent destruction in their community, but it is not accumulated and presented to a national audience. Consequently, Americans think the looting and destruction is only a local occurance… I just checked CNN and the BBC and there is nothing about the extraordinary economic destruction and massive thefts. (“The Real Racists”, Paul Craig Roberts, Unz Review)

Roberts makes a good point, and one that’s worth mulling over. Why has the media failed to show the vast destruction of businesses and private property? Why have they minimized the effects of vandalism, looting and arson? Why have they fanned the flames of social unrest from the very beginning, shrugging off the ruin and devastation while cheerleading the demonstrations as a heroic struggle for racial justice? Is this is the same media that supported every bloody war, every foreign intervention, and every color-revolution for the last 5 decades? Are we really expected to believe that they’ve changed their stripes and become an energized proponent of social justice?

Nonsense. The media’s role in concealing the damage should only convince skeptics that the protests are just one part of a much larger operation. What we’re seeing play out in over 400 cities across the US, has more to do with toppling Trump and sowing racial division than it does with the killing of George Floyd. The scale and coordination alone suggests that elements in the deep state are probably involved. We know from evidence uncovered during the Russiagate probe, that the media works hand-in-glove with the Intel agencies and FBI while–at the same time– serving as a mouthpiece for elites. That hasn’t changed, in fact, it’s gotten even worse. The uniformity of the coverage suggests that that same perception management strategy is being employed here as well. Even at this late date, the determination to remove Trump from office is as strong as ever even though, in the present case, it has been combined with the broader political strategy of inciting fratricidal violence, obliterating urban areas, and spreading anarchy across the country. This isn’t about racial justice or police brutality, it’s about regime change, internal destabilization, and martial law. Take a look at this article at The Herland Report:

What the Black Lives Matter movement does not understand is that they are being used by the billionaire white capitalists who are fighting to push the working class even lower and end the national sovereignty principles that president Trump stands for in America….

The rightful grievance over racism against blacks is now used to get Trump since Russia Gate, Impeachment, the corona scandal and nothing else has worked. The aim is to end democracy in the United States, control Congress and politics and assemble the power into the hands of the very few…

It is all about who will own the United States and have free access to its revenues: Either the American people under democracy or globalist billionaire individuals. (Politicized USA Gene Sharp riots is another attempted coup d’etat – New Left Tyranny The Herland Report

That sounds about right to me. The protests are merely a fig leaf for a “color revolution” that bears a striking resemblance to the more than 50 CIA-backed coups launched on foreign governments in the last 70 years. Have the chickens have come home to roost? It certainly looks like it. Here’s more from the same article:

Use a grievance that the local population has against the system, identify and support those who oppose the current government, infiltrate and strengthen opposition movements, fund them with millions of dollars, organize protests that seem legitimate and have paid political instigators dress up in regular clothes to blend in.

So, yes, the grievances are real, but that doesn’t mean that someone else is not steering the action. And just as the media is shaping the narrative for its own purposes, so too, there are agents within the movement that are inciting the violence. All of this suggests the existence of some form of command-control that provides logistical support and assists in communications. Check out this excerpt from a post at Colonel Pat Lang’s website Sic Semper Tyrannis:

The logistical capabilities of antifa+ are also impressive. They can move people around the country with ease, position pallet loads of new brick, 55 gallon new trash cans of frozen water bottles and other debris suitable for throwing on gridded patterns around cities in a well thought out distribution pattern. Who pays for this? Who plans this? Who coordinates these plans and gives ‘execute orders?’

Antifa+ can create massive propaganda campaigns that fit their agenda. These campaigns are fully supported by the MSM and by many in the Congressional Democratic Party. The present meme of “Defund the Police” is an example. This appeared miraculously, and simultaneously across the country. I am impressed. Yesterday the frat boy type who is mayor of Minneapolis was booed out of a mass meeting of radicals in that fair city because he refused to endorse abolishing the police force. Gutting the civil police forces has long been a major goal of the far left, but now, they have the ability to create mass hysteria over it when they have an excuse.” (“My take on the present situation, Sic Semper Tyrannis)

Colonel Lang is not the only one to marvel at Antifa’s “logistical capabilities”. The United States has never experienced two weeks of sustained protests in hundreds of its cities at the same time. It’s beyond suspicious, it points to extensive coordination with groups across the country, a comprehensive media strategy (that probably preceded the killing of George Floyd), a sizable presence on social media (to put people on the street), and agents provocateur whose task is to incite violence, loot and create mayhem.

None of this has anything to do with racial justice or police brutality. America is being destabilized and sacked for other purposes altogether. This a destabilization campaign similar to the CIA’s color revolutions designed to topple the regime (Trump), install a puppet government (Biden), impose “shock therapy” on the economy pushing tens of millions of Americans into homelessness and destitution, and leave behind a broken, smoldering shell of a country easily controlled by Federal shock troops and wealthy globalist mandarins. Here’s a short excerpt from an article by Kurt Nimmo at his excellent blog “Another Day in the Empire”:

The BLM represents the forefront of an effort to divide Americans along racial and political lines, thus keeping race and identity-based barbarians safely away from more critical issues of importance to the elite, most crucially a free hand to plunder and ransack natural resources, minerals, crude oil, and impoverish billions of people whom the ruling elite consider unproductive useless eaters and a hindrance to the drive to dominate, steal, and murder….

It is sad to say BLM serves the elite by ignoring or remaining ignorant of the main problem—boundless predation by a neoliberal criminal project that considers all—black, white, yellow, brown—as expliotable and dispensable serfs. (2 Million Arab Lives Don’t Matter, Kurt Nimmo, Another Day in the Empire)

The protest movement is the mask that conceals the maneuvering of elites. The real target of this operation is the Constitutional Republic itself. Having succeeded in using the Lockdown to push the economy into severe recession, the globalists are now inciting a fratricidal war that will weaken the opposition and prepare the country for a new authoritarian order.

This article is republished with permission from Ron Paul Institute

Comments - No Responses to “Do Deep State Elements Operate Within the Protest Movement?”