This month, the Utah legislature debated naming a stretch of highway in Utah for President Trump. Was it a portion of the Dwight D Eisenhower National System of Interstate and Defense Highways?

Naming is valuable to many. So, the trick is to get them to pay for it.

The Dixie name had been changed every other generation as the school evolved from two Academy(s), to five college(s), to University. Why not sell naming rights?

As I write this column, Dixie State reversed the name of its stadium which was sold to a business, whose hard times have apparently prevented the advertiser from fulfilling its financial promises. So, why not put it up for sale again, and promote it world wide. Auction it off

Show me the money is a classic Tom Cruise and Cuba Gooding Junior persiflage in the movie “Jerry Maguire.” It’s all about the money. 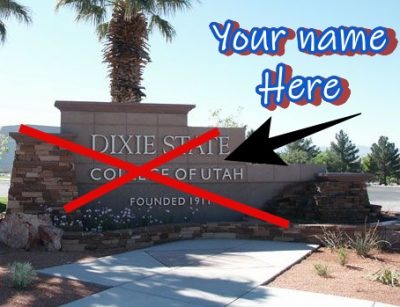 Selling naming rights could bring in thousands, millions, or billions. The terms could be selling for 25 years, or some period negotiated by the funder, and allow much more than just enough to cover costs, if signs or other new communications are required. For highways or streets, each block could be for sale. Map makers and GPS software producers would love it. For cities, such as Saint George, put the money into an endowment such as used by BYU, Yale, Stanford, or Harvard. Enough could be raised to moderate taxes, or even make the local services tax free. Conduct auctions!

Consider some history. What would naming rights for Dixie State be worth? Five Billion? More than a century ago, legend has it that tobacco industrialist Duke offered his fortune to Princeton for a name change, but was turned down. Duke shopped around and found Trinity college in North Carolina, which took the money, changed its name and voila, Duke University. Which also brings up possible objections. What if the suggested name is offensive?  Well, beauty is in the eye of the beholder, and offensive is the same way. Duke’s mascot are the Blue Devils, which nick-name is offensive to me. But so what?

More history. The Collegiate school in the Colony of Connecticut was founded in 1701, later moved to New Haven, the first town which granted it sufficient lots to establish a campus. Then begging for money, just under two decades later, a British mercantile trader, Elihu Yale, sent a library, money, a portrait and merchandise from India to the New Haven college. The Yale fund web site notes that the merchandise was sold for about 800 pounds sterling, to fund the college, erect a building for classrooms and dorms. Doesn’t sound like much today, but the web site notes that this was the largest single donation to the school for the next century and a half, just before the great Civil War. Yale takes the naming rights seriously and its Yale Fund has suggested prices for naming everything the schools has – professorships, scholarships, deanships, rooms, buildings, court yards, dining halls, libraries, single books, chairs, residential colleges, statues, paintings. You name it, and you can name it for a donation.

Harvard was named for john Harvard. Sometimes the wealthy start their own schools, such as the Leland Stanford junior University, named and funded by the Mercantile and Railroad magnate in memory of his lost son.

Then there are naming rights for coliseums and football stadiums, and football games, golf tournaments, tennis matches. Advertising.

Cities even change names. North Tarrytown New York, originally an early colonial Dutch settlement, held onto its name for nearly 400 years, until it figured out that as a tourist trap, made famous by Washington Irving’s Legend of Sleepy Hollow, the town could do better on maps. North Tarrytown only changed its name to Sleepy Hollow about 3 decades ago.   Yale has changed names on its residential colleges, names dating from the 1930s. Yale’s renaming this past year moved from the famous to the obscure, I assume they collected on it.

The broadest circulation of names are in money and coins. Lots of political cache in having your face on the coin. Lincoln cent (Republican), Jefferson nickel (Democrat), Roosevelt Dime (Democrat), and the Washington quarter (Federalist).

For our first century, American coins eschewed ‘real’ people, instead going for images, such as standing or sitting female Liberty, or a noble Indian (nickel), or animal – buffalo (nickel), or Eagle (in various wing positions, both gold and silver). Real Currency was used by people by the time of the  Civil War, and now spreads familiar faces such as Washington ($1), Jefferson ($2) , Lincoln ($5), Hamilton ($10), Jackson ($20), Franklin ($100). All these ad placements could be sold for the right price.

Utah’s first territorial capitol was Fillmore, now a tourist stop off of I-15. The Fillmore Capitol docent advised the city of Fillmore was named for then President Millard Fillmore (1850-1853). There was some vague expectation of benefit, the hope being support for Deseret’s or Utah’s statehood, such as already granted to California by 1850. Utah did not get statehood under Fillmore, and Fillmore was the last Whig President. The capitol moved. Maybe it should be offered up as a location for a Trump international resort and golf course. And throw in a name change.

Show me the money.

Disclaimer: The author of each article published on this web site owns his or her own words. The opinions, beliefs and viewpoints expressed by the various authors and forum participants on this site do not necessarily reflect the opinions, beliefs and viewpoints of Utah Standard News or official policies of the USN and may actually reflect positions that USN actively opposes.

Media Requests or Partnership Inquiries – We have a growing nationwide network. If you’re interested in learning more about our work or receiving regular content from our reporters please contact our Director of Communication and Media Outreach at utsnews@protonmail.com

Steal our Stuff with Attribution  – Utah Standard News is deeply committed to restoring government oversight through non-partisan journalism. In order to provide top-quality news coverage and investigative work to your readers, our original work is free for print and may be republished in their entirety or mentioned within a news story, AND MUST INCLUDE the reporter’s name and “From http://utahstandardnews.com/.” For example, “By Sandy Smith | From http://utahstandardnews.com/” The articles from our ‘Friends’ are under copyright and are published with permission. Any republishing of these articles is STRICTLY PROHIBITED without written consent from the original Publisher.

Comments - No Responses to “Dixie Naming Rights – Show Me the Money”