Why Do We Need a National Security State? 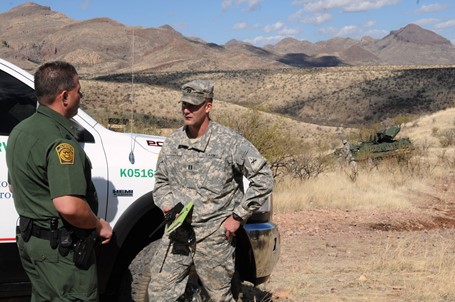 Given President Trump’s impulsive decision to suddenly send 5,200 armed US soldiers to the US-Mexico border to prevent a few thousand women and children and others from seeking refugee status in the United States, which foreign citizens are entitled to do under US law, a question naturally arises with respect to those troops: What were they doing before they were sent to the border?

The answer is: Nothing, at least nothing productive.

Oh sure, one can say that they were training to kill more people in Iraq, Afghanistan, Syria, Africa, or other parts of the world. Or they might have been preparing an invasion of some other country in the world. Or they might be figuring out how to best enforce the embargoes and sanctions against the people of Iran, Cuba, North Korea, and elsewhere.

But how can any of that possibly be considered productive? None of the people they are killing are attacking and invading the United States. Neither are the governments in the countries in which the victims are citizens. Moreover, the constant, never-ending killing brings the constant, never-ending danger of terrorist blowback against the United States, which US officials then use as an excuse to destroy further our own freedom and privacy here at home.

How is that productive?

The sanctions and embargoes do nothing but bring death, suffering, impoverishment, and misery to the people in countries who happen to find themselves living under a regime that US officials don’t like. By targeting the citizenry in those countries, US officials are hoping that the targeted people will initiate a violent revolution that will oust their regime from power and install one that is acceptable to US officials. But such a revolution would only bring more death and suffering, along with more anger and hatred against the United States.

How is that productive?

Our American ancestors had it right: No US government meddling in the affairs of other countries. No foreign wars. No foreign aid. No sanctions or embargoes. No US-inspired coups. No wars of aggression. No torture. No rendition. No alliances. No partnerships with dictatorships.

Such being the case, there was no need for a giant military-industrial-congressional complex. Yes, there was an army for the first 100 years of US history but it was a relatively small army. Large enough to defeat Indian tribes and even defeat Mexico in a war but nowhere large enough to invade and occupy European and Asian countries, intervene in their forever conflicts, or initiate wars of aggression against them.

There was also no need for a CIA or NSA or vast military-industrial-congressional complex. In fact, if the proponents of the Constitution had told our American ancestors that they were bringing into existence a government that had the omnipotent power to take them into custody, hold them forever without a trial, torture them, spy on them, experiment on them, and assassinate them, they never would have approved the Constitution. We would still be operating under the Articles of Confederation, where the federal government’s powers were so weak it didn’t even have the power to tax. Our American ancestors liked it that way.

Let’s assume that we were to bring all US troops home from everywhere, including Germany, Korea, Japan, the Middle East, Africa, Latin America, Afghanistan, Cuba, and everywhere else.

What would we need them for? We obviously wouldn’t need them at all given that they would have been engaged in actions overseas that were no longer being engaged in. They could all be discharged into the private sector. That would be doubly positive: No longer would citizens be taxed to fund what is essentially a military welfare dole, but also all those former soldiers would now be in the private sector producing wealth rather than living off of a tax-funded military dole

So, the question again arises: What do all those troops do on a daily basis on all those military bases that are strung out all over the United States? They’re clearly not protecting American cities from Indian (i.e., Native-American) attacks because that danger was eliminated a long time ago. And they’re clearly not protecting the United States from an invasion or conquest because no such danger exists. So what do all those soldiers do on a daily basis — that is, when they are not being sent to the border to possibly shoot women and children and other prospective refugees?

They practice shooting or they training new recruits how to kill. They are training them how to march — left-faces, right-faces, and to the rear. They clean their rifles. They maintain their vehicles. They learn how to drive tanks or fly military aircraft. They do bureaucracy-type work. They do lots of paperwork. They collect their paychecks, which come from taxes the IRS collects from people’s income. They go to work and they return home. It’s all so mundane and unnecessary. And none of it is productive. That is, it does not produce wealth in American society. Instead, it drains wealth from society in the form of taxation to fund all this unnecessary and unproductive activity.

The biggest mistake the United States ever made was to convert the US government from a limited-government republic into a national-security state. The Founding Fathers and the Framers had it right. The best thing that the American people could ever do is dismantle their national-security state governmental structure and restore a limited-government republic to our land. That would naturally entail the dismantling, not the reform, of the NSA, CIA, Pentagon, and what former President Eisenhower labeled the military-industrial-congressional complex.

Reprinted with permission from Future of Freedom Foundation.

Comments - No Responses to “Why Do We Need a National Security State?”