Ronald Mortensen, Ph.D., an earlier supporter and long-time columnist for UtahStandNews.com, has been nominated by President Trump to be the Assistant Secretary of State for the Bureau of Population, Refugees and Migration. If confirmed by the Senate for the State Department role, Ronald would be responsible for overseeing the U.S.’s handling of vulnerable populations, including refugees and asylum seekers. He will be a great asset to the United States of America (but a loss to Utah’s citizen lobbyists and USN). Ronald is an out-spoken critic of illegal immigration. In some news reports, this may be misconstrued. 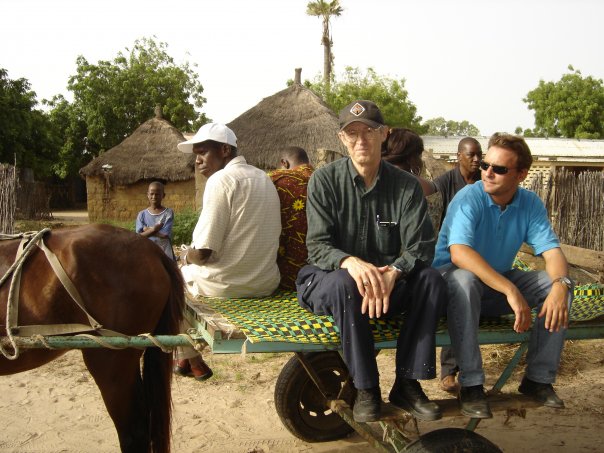 Ronald founded the Utah Coalition on Illegal Immigration which called upon the U.S. to take “concrete action” to address the “serious problem” of illegal immigration. He is also a fellow at the think-tank Center for Immigration Studies that provides “immigration policymakers, the academic community, news media, and concerned citizens with reliable information about the social, economic, environmental, security, and fiscal consequences of legal and illegal immigration into the United States.

Ronald is a U.S. Air Force veteran and a retired Foreign Service Officer. He was on the White House Advance Team that prepared and administered the Reagan-Gorbachev meetings in Reykjavik which marked the beginning of the end of the cold war. He was recognized for courage by the U.S. Department of State during a crisis in Chad and continues to respond to humanitarian crises around the world in Iraq, Syria, and even the Ebola crisis in West Africa. Ron has performed this work with the United States Agency for International Development’s Office of Foreign Disaster Assistance (USAID/OFDA). He is active in Utah politics and has spent considerable time on state legislative issues.USAID was last this year’s winner of the Samuel J. Heyman Service to America Medal in the category of National Security and International Affairs. Ronald was featured in an article at Medium.com for his humatarian work. 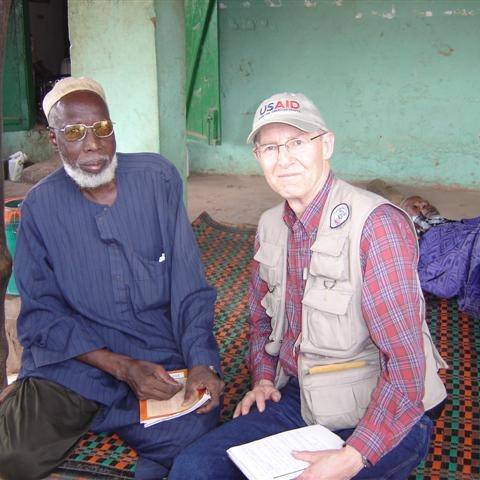 Meeting with the Village chief in Dembakunda Kuta, The Gambia.

The MEDIUM.COM article states: Ron Mortensen has served as the DART Leader in Iraq five times over the past two-and-a-half years. In this lead role, he collaborated and coordinated with some of the highest U.S. government officials in Iraq. However, he believes the real recognition belongs to the locals on the ground.

The true heroes in this response are the Iraqis and Syrians who are delivering the humanitarian assistance on the ground under extremely dangerous and difficult situations,” he said. “The Iraq government also deserves recognition for its efforts to safeguard the lives of the hundreds of thousands of civilians located in combat areas.”

He has been a staunch advocate against illegal immigration. In a piece he wrote for  The Hill with the headline “Most Illegal Aliens Routinely Commit Felonies.”, he said that the perception of the percentage of immigrants committing crime was lower than that of U.S. citizens was “critically flawed,” and that “the myth of the law-abiding illegal alien is just that: a myth.”

In an article he wrote for the Center of Immigration Studies in September 2014, Ronald called the Wall Street Journal “fake news… because a huge proportion of illegal aliens are committing felonies in order to get jobs, the Journal is forced to differentiate between “serious crimes” and “not-serious crimes.” And then it has to say that victims’ assistance programs are not necessary because to say otherwise would acknowledge that illegal aliens were committing crimes with real victims. Thus, by the time the Journal achieves its desired results, it has relegated itself to reporting fake news based on fake facts”

He also stated that John McCain rolled out the “welcome mat for ISIS on America’s southern border” after he argued in favor of creating a pathway to citizenship for undocumented immigrants in the U.S. “By helping pass the Gang of Eight bill with no intention of controlling the southern border, McCain prevented the House from enacting a strong, stand-alone border control bill because everyone knew that he would use a conference committee to gut it or replace it with a stripped down, open-borders version of the Gang of Eight bill.” 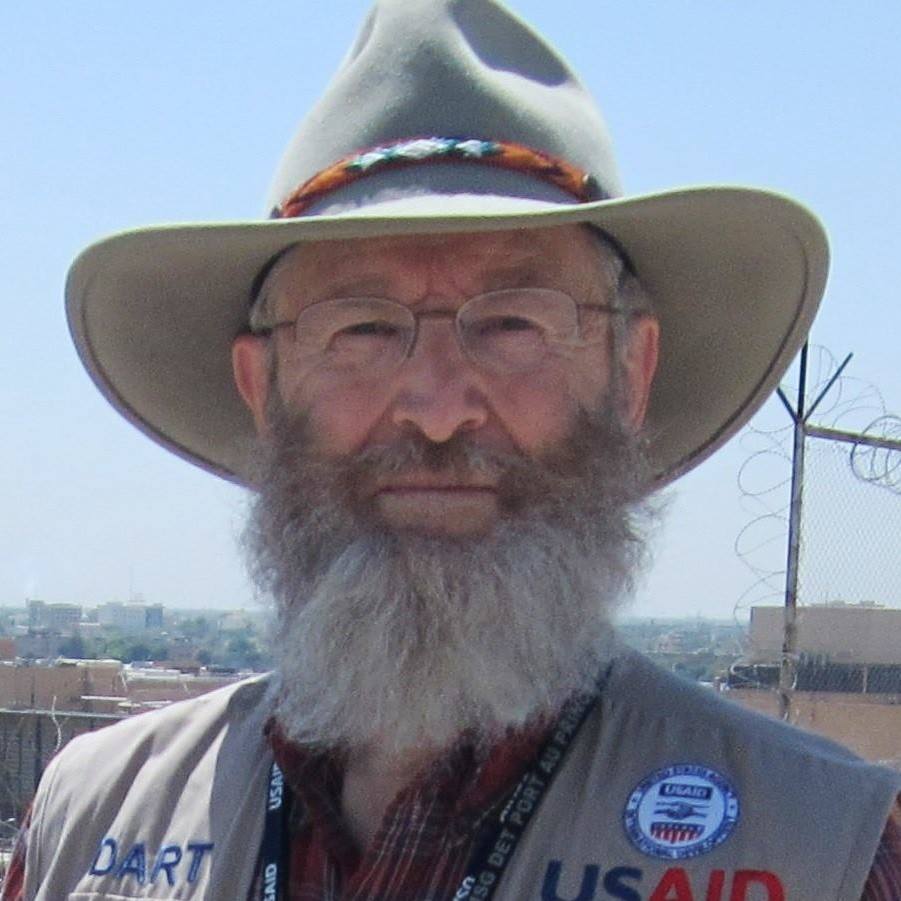 He wrote: “[McCain] has never supported using the U.S. military to defend the southern border from incursions by individuals and groups who would bring their terror and wars directly to the United States. So, McCain has guaranteed that the southern border remains vulnerable to any terrorist wishing to exploit that means of entering the United States.”

Ronald’s appointment is seen by some as evidence that President Trump is “getting bolder” in advancing his anti-immigration agenda. In a Newsweek article, Greg Siskind, a prominent immigration attorney, said the “president has put a lot of extreme anti-immigrants in key positions, but has been careful not to put them in jobs requiring Senate confirmation.”

During the DOS vetting process, a DOS representative visited my home and questioned me extensively about Ronald. I stated that I would have no reservations recommending Ronald for any position in our government. His character is impeccable. His intelligence and ability to sift through data without bias is unsurpassed. And, his love for humanity, his concern for our country, our citizens, and our laws, is of the highest order. I couldn’t be prouder of my association with Ronald Mortensen.

Ronald’s columns for USN can be found here

THE WHITE HOUSE Office of the Press Secretary FOR IMMEDIATE RELEASE May 25, 2018

President Donald J. Trump Announces Intent to Nominate Personnel to a Key Administration Post President Donald J. Trump today announced his intent to nominate the following individual to a key position in his Administration: Ronald Mortensen of Utah, to be an Assistant Secretary of State for Population, Refugees, and Migration. Dr. Mortensen is a retired Foreign Service Officer. For the past 15 years, he has worked with the U.S. Agency for International Development’s Office of Foreign Disaster Assistance (USAID/OFDA). Dr. Mortensen served at U.S. diplomatic missions in France, Australia, Canada, Gabon, Mauritania and Chad. He has worked on humanitarian responses that saved lives and alleviated the suffering of millions of people in Iraq, Syria, Mali, Libya, Haiti, Ethiopia, Lebanon, Pakistan, Sudan, the Democratic Republic of the Congo, and many other countries in West Africa. Most recently, Dr. Mortensen served as Disaster Assistance Response Team leader in Iraq. Dr. Mortensen is the recipient of numerous Department of State (State) and USAID awards including the Una Chapman Cox Fellowship. He is a Vietnam era, Air Force veteran. Dr. Mortensen earned two B.S. degrees and a Ph.D. from the University of Utah and an M.A. from the University of Oklahoma. He speaks French. 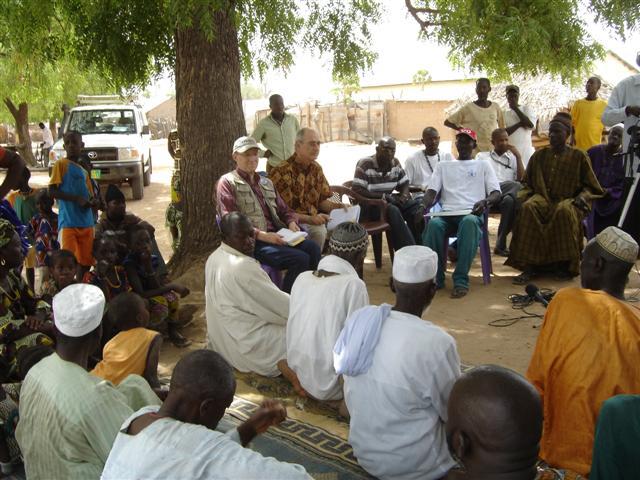 Ron spent five days in The Gambia (West Africa) last week conducting a rapid food security assessment. The attached photo was taken at a “town” meeting where we were discussing the food security situation.
The situation is grim since the 2011 harvest failed and people only grew enough food to last several months. Also, there is a serious lack of seeds which are required for this years planting. 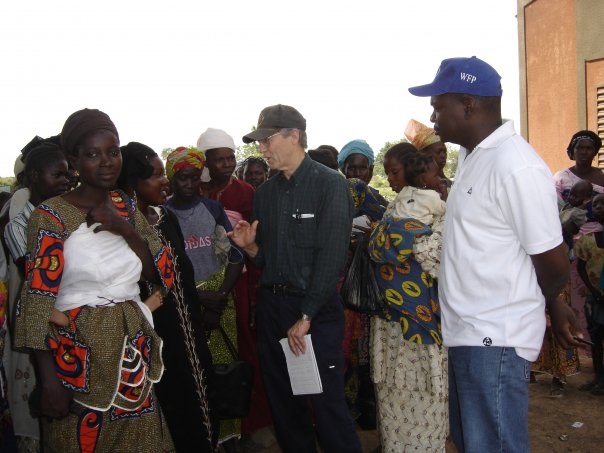 Met with beneficiaries of a U.S. taxpayer funded voucher program designed to help extremely vulnerable people purchase food. Although these are exceptionally poor people they have tremendous pride in themselves and their looks.
Families with children between 6 and 24 months also received PlumpyDoz, a high nutrient food, to help prevent malnutrition. Location: Ouagadougou, Burkina Faso. Great way to spend 24th. 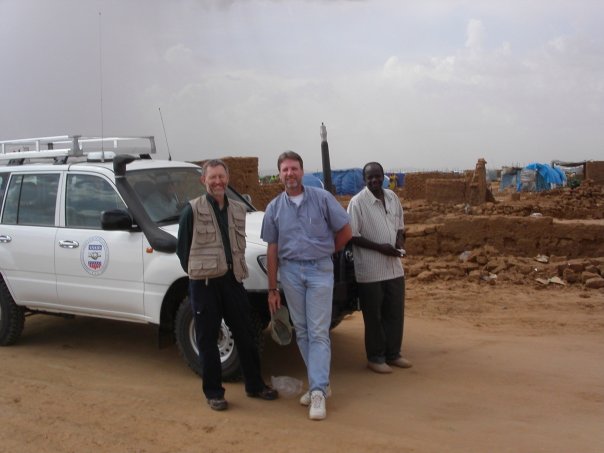 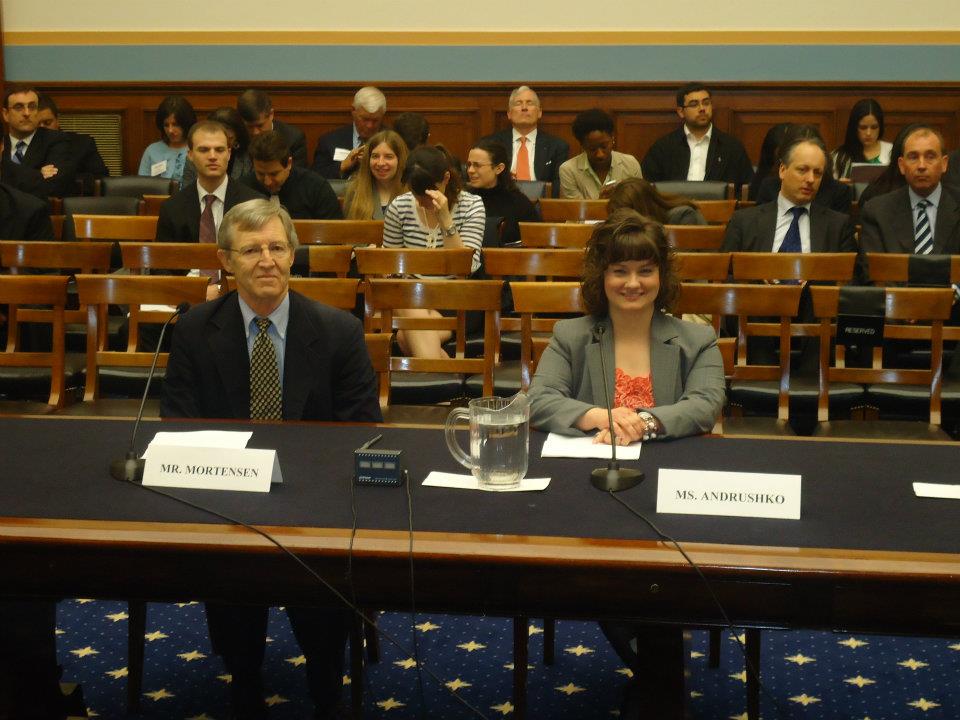 Comments - No Responses to “Utah’s Ronald Mortensen Nominated for Top Position at DOS.”