These California Rebels Are Working With Trump, Not Against Him 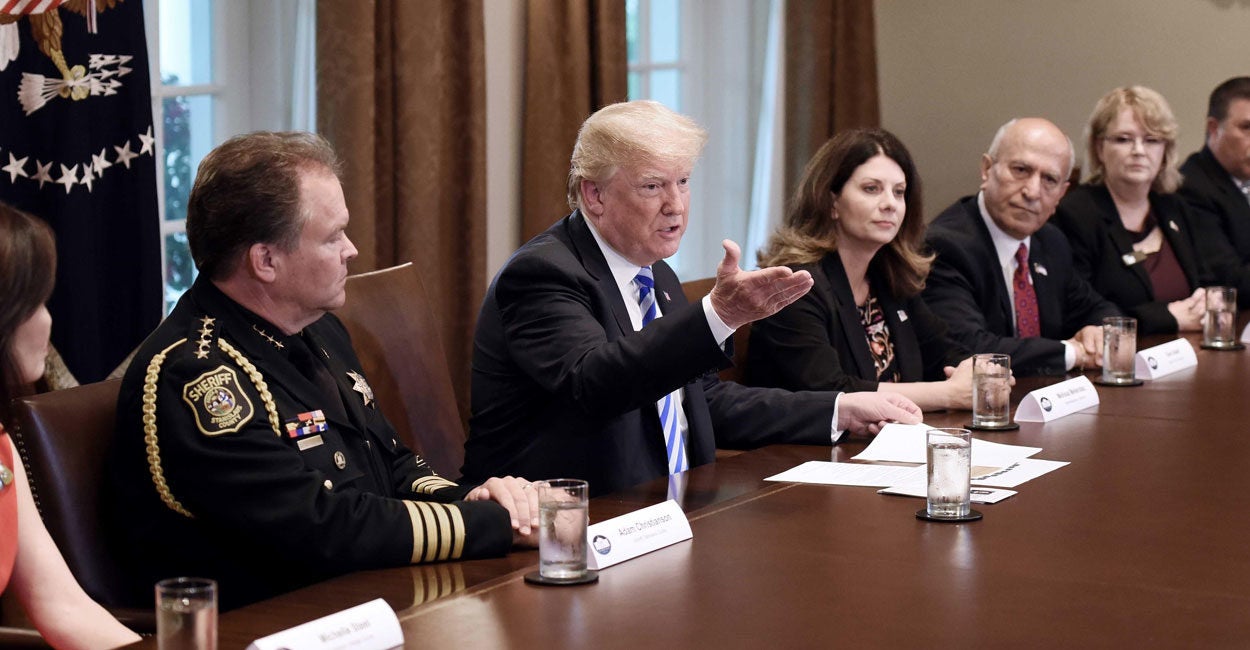 President Donald Trump meets May 16 at the White House with public officials and other leaders from California who oppose their state’s sanctuary policies. (Photo: face to face/Zuma Press/Newscom)

Jarrett Stepman is an editor and commentary writer for The Daily Signal and co-host of “The Right Side of History” podcast. Send an email to Jarrett.

The resistance is growing in California.

The Golden State has set itself up as the stridently progressive thorn in the side of the Trump administration. California has not just become a sanctuary state in an attempt to undermine federal immigration enforcement, but has gone a step further.

Recently, California lawmakers proposed giving health care to illegal immigrants, which would make it the first state to do so. The plan would cost state taxpayers billions of dollars.

However, as the state, which is under nearly one-party rule, doubles down on its left-wing drift, there is bubbling discontent among residents who are outraged by California’s increasing lawlessness and wild spending.

>>> The Changes That Made California Become a Left-Wing Fiasco

A growing list of cities and counties have chosen to take action against California’s sanctuary policies intended to undermine federal immigration law. They are resisting the resistance.

These localities are taking aim at the California Values Act, which, according to the Orange County Register, states that “local and state law enforcement authorities may not use resources, including personnel or facilities, to investigate or arrest people for federal immigration enforcement purposes.”

The latest city to rebel is Carlsbad, which is close to San Diego in Southern California.

The Carlsbad City Council voted 4-1 Monday to join the federal government’s lawsuit against California’s sanctuary state status, according to The San Diego Union-Tribune.

“I cannot see the difference between a sanctuary state and a secessionist state,” Glenn Bernard, a retired Marine and former teacher, told the council, according to the Union-Tribune.

The council’s criticism of California’s sanctuary status echoed that of others around the state.

Other cities have taken additional measures to cooperate with federal immigration enforcement.

The Los Alamitos City Council voted to exempt itself from the state sanctuary law, saying the measure is unconstitutional. This prompted a lawsuit by the American Civil Liberties Union.

This is the “rebellion” President Donald Trump referred to when he visited California in mid-May.

The media, dishonestly, mischaracterized some of Trump’s comments at the event, insinuating that he called “some” illegal immigrants “animals” when the context shows he was referring to members of the violent MS-13 gang.

Lost in the media storm was the serious and growing discontent over radical, left-wing policies in the deep-blue state.

“Each of you has bravely resisted California’s deadly and unconstitutional sanctuary state laws,” Trump said, according to Fox News. “You’ve gone through a lot, too, although it’s become quite popular what you do.”

Cities such as Carlsbad and Los Alamitos use a similar rationale to resist the state as the state does in resisting the federal government. It turns out that although California is verging on one-party rule at the state level, significant dissent to sanctuary policies exists in wide swaths of the state.

The common thread from this growing movement is that the state’s policies are reckless, put the lives of citizens in danger, and  promote criminality.

“We are not anti-immigrant—there is no one on this council that’s anti-immigrant,” said Hesperia City Councilman Paul Russ, according to the Desert Dispatch. “But for immigrants, we’d like to see it done legally. I can also say without a doubt that we are anti-criminal. It’s not about the immigrants; it’s about the criminals in the community.”

The movement has touched on an important element of the debate about immigration, sovereignty, and what it means to be a citizen.

Not every immigration policy has been good, but regardless, they ultimately were created by the American people.

The message that sanctuary laws such as California’s send is that Americans have no right, as a nation, to determine who comes into their country.

If there is an attack on “democracy,” this surely is it.

People set up governments to ensure ‘their Safety and Happiness’ and provide ‘for their future security.’ Immigration policy, like all other policy, should therefore serve the interests and well-being of the American people. One should not confuse the universal duty not to infringe upon the rights of man with the duty of each government to secure the rights of its people only.

In other words, Americans may choose whom we let in and whom we don’t, for good or ill.

California’s leaders may be enthusiastically pursuing a fight over immigration law with the federal government, but they will face a growing wave of discontent from citizens who are sick of lawmakers in the state capital fueling lawlessness and ignoring their concerns.

Comments - No Responses to “These California Rebels Are Working With Trump, Not Against Him”