The Islamization Of America’s Schools

A few days ago, I ran across an old article from CNN. Although this is an old article and I hardly consider CNN newsworthy, the subject matter enticed me to write about it. Here is the title: All schools shut down in Augusta County, Virginia, over Islam homework, December 19, 2015.

Well, what can I say? The Islamic paradise is playing out live, but not in living color, only in a mono color — black. Just like Islam itself very black and dreary. Take a chance, if you like, and take a trip to Iran for personally experiencing the horror of Islamic rule, the Shiite version. And while you are in the neighborhood, take a side trip to Saudi Arabia for the Sunni model. Then come back and share your experiences with the folks here. Please make sure to invite me to hear you.

In good conscience, though, I strongly recommend against doing what I have suggested. Particularly since no women should even entertain the idea of doing so. Islamic law, sharia, puts women in the same category as slaves. Yes, Islam thoroughly condones slavery and stipulates their rights at the level of domestic animals.

As I mentioned earlier while I was glancing through an old CNN article the other day, there was a 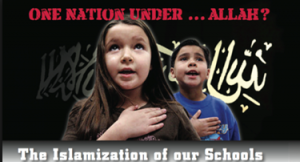 report on some school in Virginia that had their students write the Shahada, in an effort to teach them Arabic calligraphy. Well, this is academic jihad calligraphy by writing out the statement “There is no god but Allah and Muhammad is the messenger of Allah.” Well, okay, if learning Arabic calligraphy is a subject of immense value to any child’s education so that they may become skilled in the sciences of the 21st century, so be it.

Of course, I have a huge problem with this poorly disguised scheme of luring students into the trap of Islam by any and all devious means possible.

I have an even bigger problem with the media, such as CNN. Why? In this case, in reporting, they deleted the most critical part of the Shahada to make it look somewhat harmless. The Shahada is the statement of belief in Islam. When anyone impresses the Shahada in any shape or form, he is confessing his acceptance of Islam. And once you express it, you are a Muslim. And if you ever leave Islam, you become an apostate and subject to death.

Now, here’s the real problem. In CNN’s translation of the Shahada, they (intentionally) left out a critical part. The Shahada starts by: I testify (meaning I accept, I verify) that there is no god but Allah and Muhammad is his messenger.

And the school authorities say that there is absolutely no religious scheme in this practice. Well, I would be shocked if these conniving goons would ever speak the truth and when they stop short of deceiving non-Muslims by any and all means to convert them. It is a central doctrine of their religion– taqiyya –to deceive non-Muslims is a meritorious deed when it serves Islam.

My problem with CNN and their fellow travelers who are complicit in the crimes of doctored or inaccurate reporting that clearly protects and advances the work of these Islamic criminals who are taking advantage of our benign and open society to destroy it from within.

Then I ran across Pamela Geller’s article: Islamizing the Schools: The Case of West Virginia, dated May 23, 2018.  The same outcome:

“This is exactly what I warned about in my book, Stop the Islamization of America: A Practical Guide to the Resistance, in the chapter “The Mosqueing of the Public Schools.”

“In order to convert to Islam, one says the shahada.  Saying the shahada makes you a Muslim.  The shahada is what is on the black flag of jihad.”

“No non-Muslim student should be forced to write or say the shahada without the qualifier “Muslims believe that…”  This is because it is a statement of faith.  If the school exercise is requiring students to write it, it should be clear from the wording of the exercise that this is Islamic faith, not the student’s faith.  That distinction has been glossed over in many, many school textbook presentations.”

“A retired Florida teacher contacted Clarion Project after we published the article “Why Is This Being Taught in Public Schools?” That piece told the story of a West Virginia parent who was upset after his daughter was asked to write the shahada, the Islamic declaration of faith, as part of “calligraphy practice” in her world religion class.”

Let me explain and expose Islam and its harm. Islam is extremely possessive of its subjects. It is a religion that admits anyone into its fold by the person simply uttering a one sentence statement of faith, the shahada: I bear witness that there is no God but Allah and Muhammad is Allah’s messenger. By so saying, one becomes Muslim for life and surrenders the right of ever leaving it. Anyone who leaves the Islamic fold is murtad (revert), apostate.

The notion of apostasy is best understood within the overall Islamic dogma. Islam forms a binding covenant with the believer. Once a person is Muslim, he and his issue are considered Muslim forever. In this covenant, Islam promises to bestow its beneficence on the faithful conditional on the person’s total and unquestioned surrender to it in all matters.

Muslim organizations have been busy and working “stealthily” changing America in what is called “Soft Jihad,” or “Cultural Jihad,” in the United States. Soft Jihad is practiced where the sword of jihad is not advisable, where Muslims are not strong enough to unsheathe their sword, where the true nature of Islam is exposed and when the general public would likely stamp them out.

A critical tool of soft jihad, involves penetration of the American educational system, by use of means such as Da’wa-a religious duty of each Muslim to convert non-Muslims in order to strengthen the Islamic Ummah.

This article is republished with permission from our friends at News with Views.

Comments - No Responses to “The Islamization Of America’s Schools”