The Greatest Sham on Earth 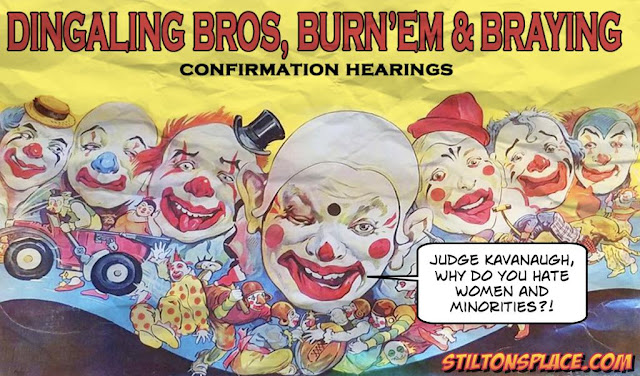 To the surprise of pretty much no one, the confirmation hearings for Supreme Court nominee Brett Kavanaugh erupted in shouts, shrieks, motions, emotions, and parliamentary nonsense before the judge’s name was even announced.

Democrats, in what apparently was a pre-planned move to sabotage the proceedings, called for immediate adjournment in order to give them more time to slowly and thoughtfully pore over every word ever written by or about the nominee – a rather odd change of pace for the party which heretofore embraced the “pass it to see what’s in it” policy of avoiding any actual reading.

Fetus-hating hecklers, sadly deprived of their pussy hats, also screamed hysterically from the gallery before being dragged out forcibly by security personnel, prompting Democrat Dick Durbin to admiringly characterize their shrill attacks as “the noise of Democracy.” A noise which we think might be well matched with the ball-gag of decorum.

The hearings have a long way to go, but we’re off to a predictably ridiculous and depressing start to a process which should be conducted with a degree of solemnity and seriousness of purpose. The very qualities we’re hoping to see Judge Kavanaugh bring to the Supreme Court as soon as possible. 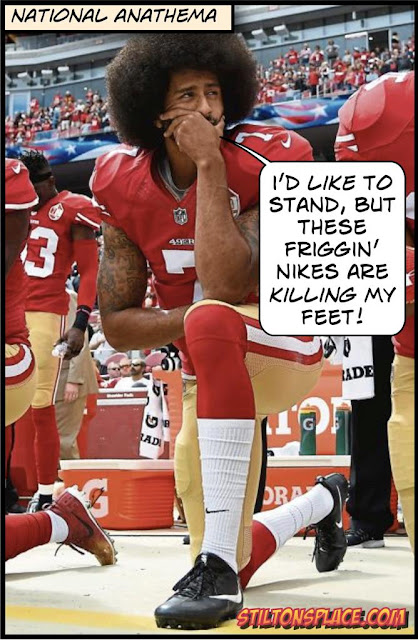 America’s ongoing quest to always have something to be hyperventilating about has temporarily been satisfied by the announcement that Nike has named Colin “Kneepads” Kaepernick as their newest “Just Do It” spokesperson. Which is more than a little ironic, considering he wouldn’t take that simple advice when it came to showing respect for our national anthem.

Nike’s choice of Kaepernick certainly generated the publicity they were hoping for, but has also caused a few minor drawbacks. Specifically, a nearly $4 billion drop in their stock market value as well as a boom in highly entertaining Youtube videos in which people find creative ways to set Nike products on fire.

We also find a certain irony in Nike’s desire to use Kaepernick to demonstrate their sense of “woke” social consciousness, considering that any of the underpaid sweatshop laborers who make their products overseas would probably be flogged senseless for staging a knee-bending protest during working hours.

But in the immortal words of Rhett Butler, we frankly don’t give a damn about Nike, Kaepernick, or the horse they rode in on. And as far as a boycott of Nike products go, we enthusiastically say “Just do it.”

Comments - No Responses to “The Greatest Sham on Earth”