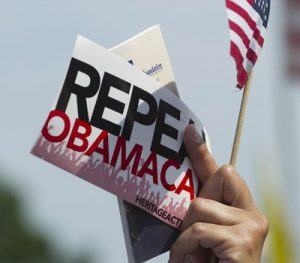 House and Senate budget leaders, along with conservative lawmakers, are beginning to unite around a proposal that would avoid a filibuster from Senate Democrats and put a bill repealing key provisions of Obamacare on President-elect Donald Trump’s desk not long after his inauguration—a bill that is likely to earn his signature.

In the days following the election, scholars and lawmakers began floating plans to unravel the health care law.

But now, House and Senate budget leaders have endorsed a proposal that involves Congress passing two budget resolutions—one for 2017 and one for 2018—early next year, the first of which would instruct lawmakers to use a budget tool called “reconciliation” to dismantle the health care law.

Under reconciliation, legislation under consideration by the Senate needs just a simple majority, 51 votes, to pass, blocking a filibuster by Senate Democrats.

Because Congress failed to pass a budget resolution for 2017—a proposal stalled in the House—budget experts say Republicans could pass a revamped fiscal roadmap for next year, one that includes reconciliation instructions for Obamacare’s repeal.

To ease the transition for consumers, that reconciliation bill would likely have a delayed enactment date to give congressional Republicans time to craft and pass a replacement plan.

Using this two-budget approach to repeal Obamacare would give Republicans the chance to put a bill dismantling the health care law on Trump’s desk soon after his Jan. 20 inauguration, lawmakers said.

Enzi told Politico that this double reconciliation strategy would allow Republicans to address their top legislative initiatives without having to worry about filibusters from Senate Democrats.

Price and Enzi are at the helm of the committees that draft the budget resolutions that would include reconciliation instructions.

Not only have Congress’s budget leaders endorsed the use of reconciliation to dismantle the health care law, but the strategy also earned the support of House conservatives, who have long said they have an obligation to voters to repeal the Affordable Care Act.

“Health care will be better and more affordable when Obamacare is repealed, plain and simple,” Rep. Jim Jordan, R-Ohio, told reporters Wednesday. “Everyone understood that as a huge issue in the election.”

“We have to use the reconciliation process, so let’s do it the right way, but let’s do it as quickly as we possibly can,” he continued. “It was part of the mandate that the American people sent to this town last week.”

Congressional Republicans have voted more than 60 times to repeal Obamacare and were only successful in getting a repeal bill, passed using reconciliation, to President Barack Obama’s desk earlier this year.

Because the GOP will lack the 60 votes needed to overcome a filibuster from Senate Democrats—Republicans will hold 52 seats in the next Congress—Rep. Matt Salmon, R-Ariz., said reconciliation is the only way to ensure such a bill gets to Trump.

“The only guarantee is to go through reconciliation. The Senate will never get a repeal of Obamacare off the floor. They’ve never been able to get an appropriations bill off the floor,” Salmon told reporters Wednesday. “So when it comes to heavy lifting for something as major as this, it’s probably going to have to be like we did it through the reconciliation process again.”

To successfully repeal Obamacare using reconciliation in 2017, congressional Republicans could follow a blueprint they mapped out in 2015.

That year, GOP lawmakers drafted a budget resolution for 2016 that included instructions for budget committees in both chambers to draft a reconciliation bill repealing the Affordable Care Act.

Their legislation ultimately repealed the law’s individual and employer mandates, Medicaid expansion, tax credits, and the medical device and Cadillac taxes. The reconciliation bill also stripped the government of its authority to run Obamacare’s state and federal exchanges, and lessened the fines for failing to comply with the mandates to $0.

Both chambers of Congress ultimately passed the bill, but Obama vetoed the legislation.

House Republicans then attempted to override the president’s veto, but lacked the two-thirds majority needed to do so.

Now that Republicans will control both the executive and legislative branches in 2017, GOP lawmakers have said they plan to follow through on their promises to repeal Obamacare.

Just one day after Trump won the presidency, Republican leaders were laying out their agenda for the 115th Congress, with the health care law topping the list.

“I would be shocked if we didn’t move forward and keep our commitment to the American people,” Senate Majority Leader Mitch McConnell said last week.

Republicans have discussed a replacement for the Affordable Care Act, though an official bill doesn’t yet exist.

Several GOP lawmakers have drafted their own individual proposals over the last few years, and Speaker Paul Ryan rolled out a replacement plan in June under the Wisconsin Republican’s “A Better Way” agenda.

According to CQ, it’s unclear if the GOP’s plan would be included in a reconciliation bill repealing the health care law or when a proposal would be rolled out.