Renowned Constitutional attorney KrisAnne Hall will give a series of presentations this week in Washington City. The events are free and open to the public.

KrisAnne is the most sought after national speaker on the Constitution, averaging over 250 events in nearly 22 States every year for 5 years straight. She has written 6 books on American History and the US Constitution and is now a professor at River University School of Government. KrisAnne is a regular consultant on the Constitution for numerous radio, podcast, and television programs. (See bio below)

7PM History of the Constitution

10AM The Forgotten Founders

Seating is very limited and reservations are recommended. Follow this Facebook link to reserve your seat or call Deborah Palmer at 435-215-8205. 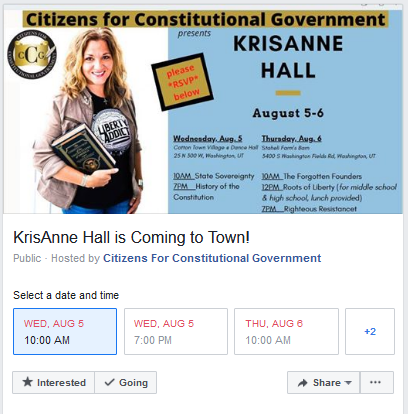 MORE ABOUT THE PRESENTATIONS:

History of the Constitution

In this 1-hour presentation Constitutional Attorney KrisAnne Hall will destroy the Living Breathing lie that says our Constitution should be reinterpreted for modern man. She will present the 5 foundational documents that make up the genealogy of our founding documents, stretching back beyond the Magna Carta and the history that gave them to us. You will see the stunning parallels with the tyranny being perpetrated today and discover why our founding documents were not created on a whim and that they are reliable and relevant today.

What is the real NOW solution to federal overreach? Article 5 convention gives a 5-10-year time frame. What if we don’t have 5-10 years to put the federal government back in its proper boundaries? No time for pointing fingers. KrisAnne Hall gives real time SOLUTIONS that We The People need to correct this federal government out of control. No opinions. Just historical facts.

So many gave so much and there were leaders that we don’t know and voices that still go unheard. In this class we will be reunited with a few essential founders that we have forgotten, or perhaps whom have never even been introduced. The student will be inspired by these patriots, amazed by their bravery and deeds, and even a bit angry that we have failed to remember and celebrate these essential men and women and their sacrifices.

How did we come from being subjects of a king to free men in a republic? KrisAnne Hall teaches our future leaders of America the history that is essential to understanding our Constitutional Republic. This history has not been taught for decades but is essential to the preservation of Liberty for future generations. No opinions. No politics. Just historical facts.

This presentation refutes the false teaching that promotes a slavish submission to civil authority. Using Biblical examples of “righteous resistors,” it lays a clear argument demonstrating a Christian’s (or any moral person’s) duty to push back against tyranny and oppression wherever it may be found.

KrisAnne Hall is an attorney and former prosecutor who travels the country teaching the Constitution and the history that gave us our founding documents. KrisAnne will connect the dots for you like no one else can! Host of The KrisAnne Hall Show, she pulls no punches,puts Liberty First and gives no quarter to those who hide behind party labels. Like no other host KrisAnne you will tell you what the founders had to say on today’s relevant issues.

KrisAnne is a disabled Army veteran, a Russian linguist, a mother, a pastor’s wife and a patriot. Born and raised in St. Louis, MO. She received her undergraduate degree in Bio-Chemistry from Blackburn College in 1991 and her J.D. from the University of Florida, Levin College of Law, and is a former Russian Linguist for the US Army. KrisAnne worked as a state prosecutor and with a prominent law firm defending religious liberty and first amendment rights. She lives in North Florida with her husband JC (a pastor and former Russian instructor for the US Navy) and their adopted son Colton.

Here she is in her own words:

“Right up front there are some things that I need to tell you about myself. I want you to know where I came from and how I got to where I am today. I don’t want to ever be accused of deception or dishonesty. So, in full disclosure:

I was not born a Constitutionalist. I did not live my life with an inherent understanding of Liberty and what is necessary to defend it. I was not raised a Christian. For some, these things will be a stumbling block, so you need to know from me.

I was raised a Democrat. The only thing more evil than Satan was a Republican in my home. There was no choices to be made in voting…straight Democrat party line was the only choice.

I was an environmentalist. An ardent environmentalist. Some of my best friends were members of Green Peace and I supported the WWF and PETA. I was a vegetarian by ideology, not for health reasons, for almost 15 years.

I believed in the “good” of scientific manipulations of food and the necessity of vaccines. Not only believed this, but helped create them when I was a biochemist for Monsanto.

I believed in Global Warming and defended it vigorously. I believed in the Big Bang and openly criticized those who believed in creationism as ignorant and misled.

I supported abortion and often openly condemned others for being pro-life. I have argued with abortion protesters on street corners and called them names that I am not proud of.

I was not only not a Christian, but I practiced many other religions, including many occult versions. I was bitter against God and felt that only ignorant, weak people needed faith. I was too intelligent and too educated for such a feeble crutch.

I was not born with the knowledge that I have now. I did not wake up one morning with a divine epiphany. I traveled a long road. Learned some hard and painful lessons. My beliefs were challenged and I came to know the Truth.

I am able to stand firm on what I believe because I have discovered the difference between truth and lies. I am able to defend the truth because I walked the path. I can show you my path of discovery, and to be guaranteed it is not tied to any political motivation or personal gain…unless you call the liberation that comes from knowing the truth in the face of lies, a personal gain.

So when someone says to you…”Did you know that person used to be associated with this or that group or used to believe this… How can you possibly believe him now?” Remember this story.

It is good to question someone’s “transformation”. You SHOULD do that. If they cannot show you that path, step by step, you should question their motivations.

Just so you know where I stand.” -KrisAnne Hall

Author of Not a Living Breathing Document: Reclaiming Our Constitution, and the DVD series The Roots of Liberty: The Historic Foundations of The Bill of Rights and Bedtime Stories for Budding Patriots and Essential Stories for Junior Patriots. Two books that inspired KrisAnne’s love for our history were Founding Brothers by Joseph Ellis and 1776 by David McCollough.

Awarded the Freedom Fighter award by Americans for Prosperity, the Certificate of Achievement from the Sons of the Revolution for her defense of Liberty, and Congressman James Blair Award for Defending the Constitution.

KrisAnne is an incredibly passionate speaker – a true Patrick Henry of our time. She speaks to audiences all across the country on Constitutional History, American Exceptionalism, and the Fight for Liberty. Her passion and enthusiasm is contagious and she is able to inspire any group. A steadfast warrior in the Tea Party battle.

Comments - No Responses to “Renowned Constitutionalist KrisAnne Hall to Speak in Washington City This Week.”