AKA: Why Evan McMullin will never be president, but why Utahns voting for McMullin might make Kaine the VP 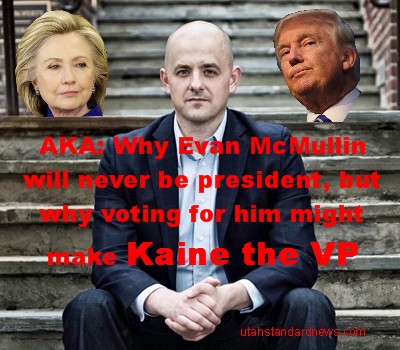 Over the last several weeks, I have noted with amusement how many articles have been written in the mainstream and not-so mainstream media declaring that there is a potential pathway for candidate Evan McMullin to become president should he carry Utah Tuesday. I have yet to see such an article that takes into consideration a very big fly in that ointment.

First the theory. According to the pundits, if Utah voted so as to hand McMullin six electoral votes in a submajority three-way split – (Question to Utah’s Republican legislators and governor: Why is a 29% plurality win enough to pick up 100% of Utah’s six electoral votes?) – and if the race in the other 49 states were such a dead heat that neither Clinton nor Trump racked up the necessary 270 electoral votes to be declared president-elect on Tuesday night, then McMullin, thanks to his third place showing, would be just as eligible as Trump or Clinton to receive votes in the sudden-death final round that decides who will be president.

My pushback to the pundits and to Evan McMullin’s supporters who disseminate this nonsense is the following: Why are all of you assuming that if McMullin wins Utah, that he will automatically come in third in the voting of the Electoral College (to be held on December 19)?

Forgotten in starry-eyed prognostications of McMullin’s mythical stairway to the White House is that at least 242 of the 538 electors have exactly the same powers they did when the 12th Amendment to the Constitution was adopted in 1804. (If you’re not familiar with what those powers are and why they were created by the Founders, a reading of Federalist Paper 68 is in order. You can do it in five minutes, but be warned, it’s not written for faint of literacy.)

The founders empowered electors to vote for the candidates that they personally think best suited to serve as president and vice president of what they hoped would be the greatest and freest country in the world. And while some 29 state legislators have acted to limit that autonomy, requiring that their state’s electors vote for the candidate who placed first (even if only with 25% – and again, I ask, “Why?”), 21 states have no laws barring electors to vote for any qualified candidate of their choosing, whether that candidate won the relevant state or not.

As we all know, the days are long gone when thousands of your trusted neighbors threw in as candidates for elector and where you voted directly for the arbiters who would represent you in the Electoral College. Instead, becoming an elector is now a very partisan two-step process.

The candidates or the parties behind the candidate submit a slate of names of individuals who will become electors should said candidate prevail in that state on election day. In other words, these electors are, almost without exception, hard-core partisans whose loyalties, for all intents and purposes, are to the party and its candidates above all else.

The second step is that the voters have to hand a win to the candidate of party which nominated them.

See the problem? The votes of the electors aren’t carved in stone on the night of the election. They are, it turns out, quite fungible. And since “fungible” is a word that I myself just learned a short time ago, let’s create a picture definition. Electors are like chess pieces that can be moved around on the board to trap a hapless third-party candidate in a scorching checkmate that he or she never saw coming. And so it is this year.

If the theoretical Electoral tally as of November 8, 11:59 pm PST ends up being 266-266-6, (as a person who has served in the State Central and Executive committees of one of the two major parties for many years), I can guarantee you that when the electors meet in their respective state capitols on December 19, that all-import vote will be anything but 266-266-6. At a minimum, it would be 266 Clinton; 259 Trump, 7 for (insert Republican McMullin killer here); and McMullin 6.

But now that I’m letting the secret out of the bag, the Republicans will have to expect that the Democrats will engage in their own chessboard tomfoolery. And by the time they run all of the possible wargame scenarios on both sides, don’t be surprised if, in the end, the votes in the Electoral College could end up being something like: Hillary Clinton 133; Tim Kaine 133; Donald Trump 133; Mike Pence 133; Evan McMullin 6, plus or minus three votes for the Democrat candidates enumerated herein.

FiveThirtyEight.com claims that the chances of this kind of McMullin-triggered brokered election materializing are less than 0.75%. As is clear in the current polling in Utah, the chances of McMullin actually capturing six electoral votes is much higher, at least 35 percent to be sure.

But the chance of McMullin coming in third in the voting that will take place on December 19? I hate to break it to you McMullin supporters, but the chances are literally 0.0000000….

And because fourth or below isn’t good enough to be eligible for consideration in the less than 1 percent likelihood that the race goes to the House, the chance of Evan McMullin becoming president thanks to a win in Utah alone is also zero with a capital Z.

To summarize. If McMullin gets six, the RNC and/or the DNC will direct their captive electors to cast seven or more votes to ensure that someone else gets seven or more. Bye bye eligibility. Bye bye fictitious scenario. Hello President Donald Trump.

In my next installment of this article, I’ll get to the the part about how a McMullin win could make Tim Kaine the vice president. See if you can beat me to it in the comments. Bye for now.

Mike Ridgway is an Republican activist and an election integrity advocate who, like Evan McMullin and a majority of Utahns, is a lifetime member of the Church of Jesus Christ of Latter-day Saints, or the LDS Church, or the Mormon Church, (He served his church mission in France just as Mitt Romney did.)

He is also a former Utah Republican Precinct Chair, a former Utah State and County Republican Delegate, and this year attended the Missouri Republican State Convention and his Congressional District as a delegate who helped to send Trump supporters to the National Convention as bound Trump delegates. Email: miketangoromeo@gmail.com

Utah Standard News is deeply committed to restoring government oversight through non-partisan journalism. In order to provide top-quality news coverage and investigative work to your readers, our work is free for print, radio, broadcast and digital media to republish with appropriate attribution.

Comments - No Responses to “McMULLIN SUPPORTERS: If you get the “brokered election” you wish for, odds are Trump and Kaine will win. OpEd Part1/2”