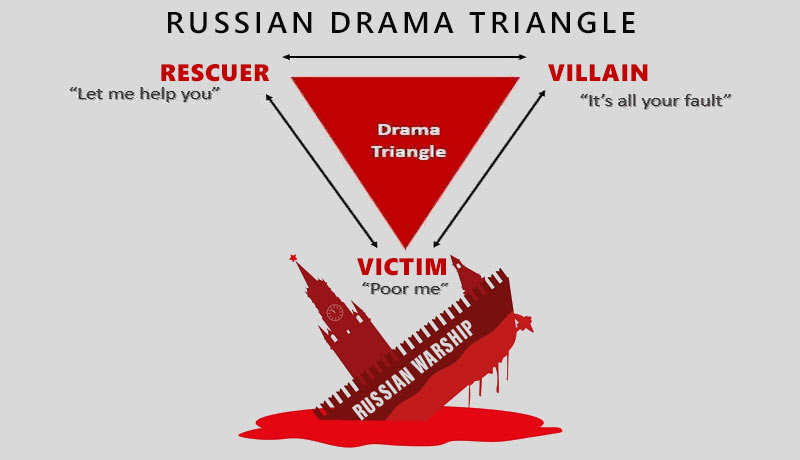 By Oleg Atbashian
First published in the American Thinker

With friends like liberal media, who needs enemies? Their virtue signaling and political spin over Ukraine is so revolting that if I didn’t know better, I’d turn against Ukraine like so many conservative commentators already have. But having lived in both Russia and Ukraine, I know better.

Just as revolting is seeing previously trusted conservative sites and TV hosts defending Russia and tarring Ukraine. Children act like that when adults apply reverse psychology. What’s their excuse? I’m not naming names because I’d like to believe they are acting in good faith and are simply misguided by crafty spinners.

Reading Russian and Ukrainian sources in the original, I know exactly who in this war is spinning lies and who is fighting for truth and freedom. Believe me, not every enemy of the liberal media is our ally or deserves sympathy. Sometimes the enemy of our enemy is an even bigger enemy.

I’m familiar with Russian propaganda well enough to recognize a scripted narrative. Some conservative hosts may not praise Putin’s ideas directly, but they favor guests and authors who deliver the influence operation script, blaming the victims and diminishing their suffering. This looks just as bad as pointing a camera at the scene of a violent rape while mocking the victim’s screaming, making fun of her clothes, saying that she deserves it, and suggesting that she stop faking pain and enjoy the inevitable.

With the media presenting such irreconcilable viewpoints, American consumers of news have split in two warring factions. But the accusations and arguments with which they hit each other over the head are false on either side.

False argument #1: Anyone who supports Ukraine wants American soldiers to die in foreign lands, or is clamoring for WW3.

I support Ukraine but I never called for Americans to risk their lives in Ukraine. There are many ways of supporting an ally without sending an army. The three weeks of fighting have shown Ukraine is quite capable of defending itself, given enough guns and ammo.

False argument #2: Anyone who questions the Democrats’ motives as related to this war is a Putin troll and a traitor.

I’ll be the first to point out that Biden and the rest of the Obama team had turned Ukraine into a feeding trough with their corrupt schemes. But that has little to do with Putin’s paranoia and his megalomaniacal motives to invade Ukraine and the rest of the former Soviet territories, redefining established borders, encouraging other known bad actors, and setting a precedent that may indeed start WW3.

Russian influence operations, or “active measures,” have been targeting the U.S. for decades, aiming to demoralize Americans and make them hate one another. Judging by the state of affairs today, Russian operations have been quite effective.

The KGB was dissolved in the early 1990s, followed by a short respite. Then Putin, a former KGB colonel, restarted the influence game and enhanced it with digital gadgets. This time, in addition to the traditional leftist radicals, he started targeting conservatives as potential agents of influence.

Russian propaganda is deeply embedded and is sophisticated enough to appear as honest opinions of concerned citizens. But what often betrays it is the narcissistic desire of making everything about Russia.

We are either fuming over Russian election interference, or over Russia setting up fake BLM pages on Facebook, or we are being dragged into sympathizing with Russia over its bogus fears of NATO expansion, its “national interests,” its “religiosity and spirituality,” and so on. In the Soviet days of communist propaganda, any American influencer could get away with it by claiming he was simply a selfless Marxist. But today, when Russia’s ideology is chauvinistic nationalism, it’s a bit odd for a regular American to be simply a selfless defender of Russia’s national interests.

While Russia’s defenders point out the existence of Ukrainian nationalism, they somehow neglect to mention the unhinged Russian nationalism. The two are not equal. The nationalism of a dominant ethnicity in an empire which aims to subjugate other ethnicities as inferior to the main one, is called chauvinism or supremacism. The nationalism of a smaller ethnicity trying to free its neck from under its “big brother’s” boot is called a movement for dignity, freedom, and independence – something American conservatives have always identified with.

Contrary to what a section of conservative media claims, Putin is not a Christian knight in shining armor fighting the New World Order. He has his own New World Order in mind, which is spiritually closer to Mordor. One look at Russian society today with its brutal suppression of dissent, government corruption, and state-sponsored brainwashing should give an idea of what he has in store for the rest of the conquered world.

Russia may have different faces at different times, but the one we are staring at today – obsessed with the cult of Putin and conspiracy theories – is not Lara from Doctor Zhivago, who never existed, but a manipulative drama queen dragging others into its alcohol-fueled problems and then using the suckers as tools to achieve its soulless goals.

Americans shouldn’t be codependent in this abusive behavior.

A top-level Russian propagandist once bragged that if his agency’s methods of psychological manipulation were open and legal, they could easily get a Nobel for inventing it. If I were to guess, at least one of those methods rely in part on the Drama Triangle principle.

The Drama Triangle was first described by Stephen Karpman in the 1960s. It is a model of dysfunctional social interactions and illustrates a power game that involves three roles: Victim, Rescuer, and Persecutor, each role represents a common and ineffective response to conflict.

[…] Most of us are neurologically programmed to play these three roles, and we consciously or unconsciously choose one role given the particular context.

Internally, on state-owned TV channels, Russian propaganda instills the sense of superiority, entitlement and indignation similar to what an abusive ex-husband feels towards his runaway ex-wife who better love him or else. In this case, the runaway ex-wife is Ukraine.

In the messaging designed for Western countries, however, Russia plays the manipulative “poor me” victim. It blames largely imaginary villains and conspiracies for its misfortunes and appeals to the kind, well-meaning but somewhat gullible people of the world (Rescuers) who believe the victim and come to the rescue at the cost of sacrificing their own interests.

Playing the role of a noble hero while forgetting about their own problems makes the Rescuers feel good about themselves for a brief time. Instead of working on their own grievances, all they can think of is the victim’s grievances, which they get to know in every detail, real or fictional.

And just like that, all of a sudden, many American conservatives today have become Russia experts, discussing the finer points of NATO’s expansion on Russian borders, Russophobia, Bandera, denazification, the Azov Battalion, special military operations, the genocide of Russians in Donbas, the movements of Slavic tribes in the Middle Ages, the plot by the CIA and State Department to install a puppet regime in Ukraine in 2014, the shooting down of flight MH17 by a Ukrainian missile, and other such nonsense.

Those Americans who disagree with the Rescuers about Russia’s victimhood are automatically categorized as Persecutors, agents of the Deep State, or of the New World Order. I’ve been called that on Facebook a few times already. Thanks a lot, Russia!

When did this triangle begin? It could already have been in place when the American left opposed the U.S. entering the war in Europe during the Hitler-Stalin friendship pact, but the moment Hitler attacked the USSR they instantly adopted a pro-war “help Russia” stance.

Americans used to be split over Russia and its exploits throughout the entire Cold War, including the Vietnam War. Even Barack Obama’s mother, a communist nonconformist, met his Kenyan father in a Russian class. She wanted to stick it to the Man, and she did.

In those days the liberals were the Rescuers and the conservatives were the Persecutors. In today’s game those roles have switched. But Russia has never stopped being the “poor me” victim with a “mysterious soul.”

The switch happened during the 2016 presidential elections, when Hillary Clinton accused Donald Trump of colluding with Russia. Before long, Americans became split over the “Russian collusion” conspiracy theory. All we could hear from the media throughout Donald Trump’s presidency was “Russia, Russia, Russia.” In the eyes of the media, Republicans became the lovers of Russia and Putin.

The myth of that unnatural love is still alive today among the Democrats. Just the other day former Obama’s ambassador to Russia Michael McFaul claimed in an interview to an expat Russian opposition journalist Yulia Latynina that if Trump were president now, he would’ve just given Ukraine to Putin as a gift of friendship.

Today “Russia, Russia, Russia” continues in the form of debates over the recognition of Russia’s “geopolitical interests” in formerly Soviet lands. The emotional details of injustice to Russia multiply daily, and we keep arguing about them without stopping to think that maybe most of those details are being made up by Russia just for this very purpose.

Nobody enjoys the “Russia, Russia, Russia” noise more than Russia. Russia likes the world to talk about Russia.

The current war will surely be followed by another emotional and heart-wrenching development, in which Russia will once again be sobbing and posing as the “poor little me” victim with a mysterious soul, while stepping on the neck of the next casualty in its endless power games.

This game won’t stop until the Rescuers of the world finally see Russia for what it is – the pathological drama queen. The only way to end this Drama Triangle is to start responding to Russia’s phony complaints by telling it to go the way of the Russian warship.

Comments - No Responses to “Liberals, Conservatives, and Russia: the Drama Triangle”