Utah state legislators’ and the Salt Lake County Mayor’s good intentions have gotten them into hot water with the people and elected officials of West Valley and South Salt Lake since these cities have been identified as potential locations for a new homeless shelter.

During an open house at the state capitol, a very diverse group of citizens from West Valley and Salt Lake City—young couples with babes in arms, seniors who have lived in West Valley for decades, a wide range of ethnicities, the adult children of parents whose long-time small businesses are threatened—wore stickers opposing the shelter and gave Mayor McAdams, members of the media and anyone who would listen an earful. 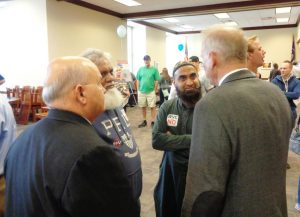 The normally laid back West Valley Mayor, Ron Bigelow, held a press conference to let everyone know that he WAS NOT HAPPY that he had not been brought into the loop by those making decisions about the placement of the centers .  “When people do foolish things, someone has to speak out,” Bigelow said.

Bigelow explained that West Valley City had tried to work through the [scandal wracked] Utah League of City and Towns to get West Valley’s voice heard in the legislature without any noticeable results.  This raises the question of why cities send so much taxpayer money to the League, but that’s another discussion.

Bigelow also observed that if the centers had been proposed for the Federal Heights or Cottonwood Cove areas that Governor Herbert would have vetoed HB441 which created the mess without a second thought.  Others from West Valley and South Salt Lake also were quick to point out that no sites on the east side of Salt Lake were being considered.

First term Representative Sandra Weight (D) and veteran state Senator Dan Thatcher (R) crashed Bigelow’s press conference to express their shock and surprise that the decision was made so quickly by Salt Lake County on where the shelters would be placed even though line 146-10 of the bill reads:  Subject to the requirements of Subsections (5) and (6), on or before March 30, 2017, the county executive of a county of the first class shall make a recommendation to the Homeless Coordinating

Committee identifying a site location for one facility within the county of the first class that will provide shelter for the homeless in a location other than Salt Lake City. 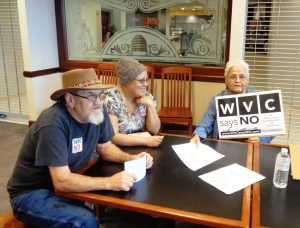 Senator Thatcher said that he had been fooled by other legislators who told him “Just trust us and vote for the bill” when it came before the Senate on the next to the last day of the frantic 45 day legislative session.  However, Rather than watching out for his constituents throughout the session, Thatcher had focused his attention on 13 bills that he was carrying (way too many and nothing directly related to the specific area he represents) plus another 12 House bills that he was the Senate floor sponsor for.

In addition, both Thatcher and Weight had to vote on hundreds and hundreds and hundreds of other bills that they often didn’t have time to read or fully understand.  So, just like all of their colleagues, they voted over and over again without taking the time to find out how any given bill would impact their constituents.  All other Senators and Representatives representing the affected cities did exactly the same thing.

During the open house, State Senators and Representatives who were elected to represent the affected areas milled among the crowd with few of their constituents even recognizing them.  It was just as well that they weren’t recognized otherwise they would have had to account for their votes.  As it was, they were able to appear to be riding to the rescue of their beleaguered constituents—who they had voted to put in the mess they were now trying to help them dig out of.

Commenting on the process, local residents compared it to government by dictatorship and the imposition of martial law while still others called for the community to unite and rise up.  So, once again, the “best managed state in the nation” looks like a modern edition of the Keystone Cops. 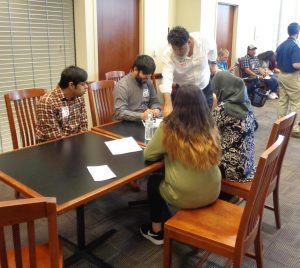 Ideally, legislators and other elected officials will one day put their constituents first or at least try to figure out what both the intended and unintended consequences are of the votes they are casting.  State legislators would do well to run fewer bills and hang out less with lobbyists and others who are sucking up their time while their constituents are working their fingers to the bone just to make ends meet.

Instead of attending legislative functions early in the morning and late in the evening with those who stroke their egos and fund their campaigns, legislators need to go home and talk to their constituents.  In fact, they should consider setting up citizen advisory panels who help them evaluate bills before they vote and they should rely on them rather than on lobbyists.

All photos courtesy of Ronald Mortensen