Friday Free For All!

There’s a lot going on in the news, and virtually all of it is ridiculous. But we won’t keep you in suspense, we’re kicking off today’s post with the MOST stupid thing we’ve seen all week…

Detroit’s Oakland University is passing out hockey pucks to faculty and student government leaders to throw at active shooters should such an event break out. Because nothing stops a bad guy with a gun like a good guy with a tiny piece of sports equipment.

Granted, a single hockey puck flung by a wimpish professorial type (ever seen how Barack Obama throws a baseball?) is only going to piss the shooter off, but the University has big plans for the future. “The ideal situation,” they say, “is that you would have a classroom full of 30 or 40 people, all of whom have hockey pucks.”

And in actuality, the idea has merit. Because if, God forbid, there ever is an active shooter event at Oakland University, we expect the person who thought up this godawful idea to get 30 or 40 hockey pucks up their ass from the survivors. Maybe then they’ll get serious about campus safety.

We find everything about this story to be delightful. The unpleasantly-aging Daniels will have to continue supporting herself by putting on debasing displays for any drunk with a dollar bill, the dolts who contributed to her campaign have been royally ripped off, and Avenatti will have to use his ill-gotten gains to pay millions of dollars in back taxes or, better still, flee the country.

The “Murphy Brown” reboot has officially been booted from view by CBS after only 13 episodes, owing to abysmal ratings and the high cost of keeping the geriatric cast members refrigerated between takes.

The idea behind the reboot was simple: “let’s bring back a show from 20 years ago and make it relevant by having every spoken word be an attack on President Trump!” Yet more proof that cocaine doesn’t really make anyone more creative.

The show starred a tastefully-embalmed Candace Bergen, and tried to entice viewers with stunts like a cameo from Hillary Clinton – because who doesn’t want to see even more of that strident old biddy? Currently, there is no word on whether CBS will try to re-reboot the show with most of the cast members and a new premise in which Murphy Brown has unexpectedly died from an opioid overdose

AND ONE MORE THING… 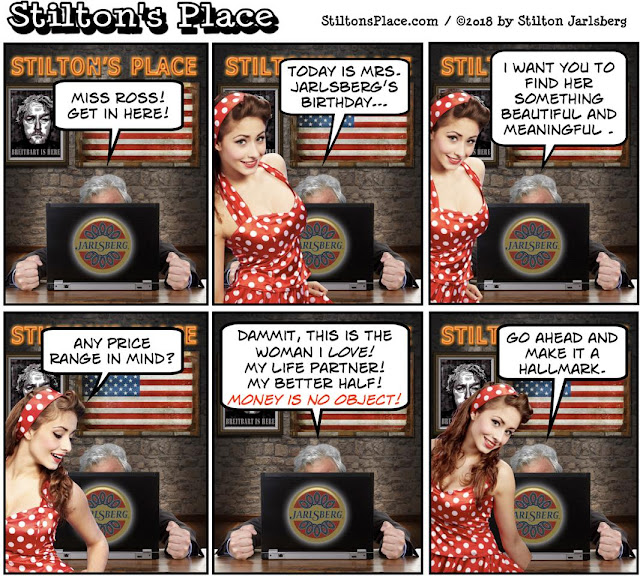 Please join me in wishing a very happy birthday to Mrs. Jarlsberg!

Unsurprisingly, she’s the real rock of the family, counterbalancing my lifelong creative chaos with stability, wisdom, and good humor. She is by far better informed on topical news than I am – she frequently points me at the important stories of the day, and has a mind which is actually analytical instead of one programmed to turn everything into a joke (albeit frequently a serious joke).

We don’t really make a big show of celebrating birthdays (she won’t even get that Hallmark card), but instead observe such occasions with our own family rituals. A hand-carved (by her grandfather) set of wooden letters spelling out “Happy Birthday” is put on display, and a little doll family that lives in our entertainment center and represents our family members will see a birthday crown worn on the head of the Mama figure.

Mrs. Jarlsberg deserves a real crown, of course, but happily has no taste for diamonds. Did I get lucky or what?

Posted by Stilton Jarlsberg at 12:01 AM

Comments - No Responses to “Friday Free For All!”