Fake News and the Horse They Rode In On 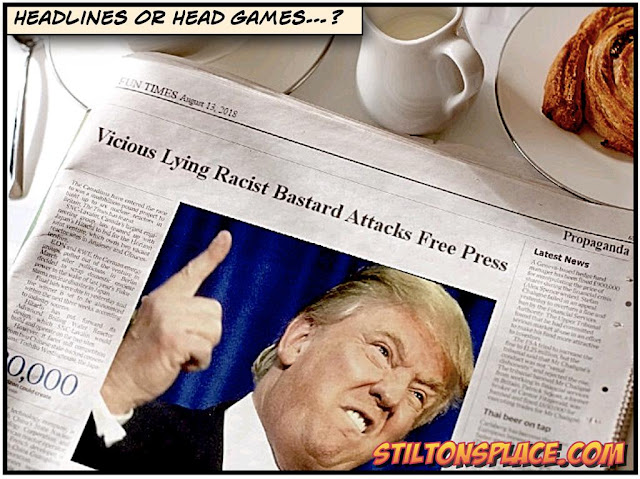 You can expect to see a lot of editorials like the one shown above on Thursday, August 16 (not that they’re hard to find any other day) when over 100 newspapers have announced plans to simultaneously publish editorials attacking President Trump for suggesting that they lack integrity and (ahem) independence of thought.

Specifically, they’re sick of being called “fake news” just because they publish stories which aren’t even remotely true, and additionally incensed that Trump has declared that news organizations which knowingly lie to America’s voters are “enemies of the people” because they’re attempting to (ahem) meddle in our theoretically sacred voting process.

In this case, we completely agree with Trump. Mind you, neither we nor Trump is saying that every reporter and/or news outlet is like that. But the majority? Well, sadly…yeah.

And while some Fake News really does depend on inventing outright falsehoods (like any story that mentions piss, prostitutes, and Putin), most of it consists of playing sleazy word games to suggest and insinuate things which sound plausible but aren’t true at all.

Calling it “spin” may sound cute, but it won’t keep you from throwing up if you’re spun hard enough and long enough.

Which is why we’re going to digress at this point (bear with us – this will take awhile) and share an idea we’ve had for a long time. One which we’d actually like to see put into place somehow.

As backstory, we’ll note that we worked professionally in the advertising industry for decades, and learned a lot about how to make anything – even a product’s shortcomings – sound good. All without lying, but with careful word choices to suggest and insinuate. And of course the process works equally well in the other direction – you can make something great sound absolutely awful without lying as long as you’re good at spin and misdirection.

First, let’s make something bad sound good. How about “circus peanuts” – those bizarre, chalky foam candies that are shaped like a giant peanut, but colored orange, and flavored with banana? They’re horrible, right? But what if we told you – truthfully – that they’re “more fun than the Barnum & Bailey circus,” “99% natural,” “super for quick energy,” “a great choice for healthy eaters,” and “may aid in weight loss?”

But what are the facts behind those implications?
• They’re more fun than the circus because that circus has gone out of business.
• They’re 99% natural because they’re 99% sugar…and 1% toxic chemicals from Hell.
• “Super for quick energy” translates to giving you a blood sugar “spike,” which you’ll soon crash from.
• “A great choice for healthy eaters” because unhealthy eaters – or diabetics – could be killed outright by these suckers.
• “May aid in weight loss,” or may not. Because “may” is a magic weasel word.

Turning good to bad without lying is just as easy. If Trump invented a cure for cancer, here’s what the media might say:
• Trump drug to put thousands of specialists out of work.
• Social Security in financial turmoil as Trump drug causes millions to live longer than expected.
• Trump drug was tested on adorable animals who could have gone to petting zoos.
• Despite praise, Trump drug still does nothing to curb gun violence.

See how the game works? Which finally brings us to our actual idea: we’d like to design a class for school kids in which they learn all of this – how to recognize it (“circle the weasel words in this paragraph”) and how to do it themselves (“Find 10 good things to say about a maggot infested wound”). Our goal would NOT be to create more and better liars, but rather to teach kids a new way to look at the information being crammed down their throats.

Mind you, adults could benefit from the same training, but we think more good could be accomplished by letting kids know the actual rules of the persuasion, dissuasion, and misrepresentation game as early as possible.

Because if they’re going to live in a media-saturated world, their best defense against “fake news” is going to be real and conscientious skepticism.