Noted national Electoral College defender Trent England will give a presentation Thursday, May 27, 2021 at 7pm at the Red Lion Hotel & Conference Center, 850 South Bluff Street in St. George. The event is free and is hosted by WashCo based Citizens For Constitutional Government and is sponsored by UtahStandardNews.com. Seating is very limited. There is an event link to make reservations or you can just show up and hope for a seat.

Trent England is founder/director of the Center for the Constitution & Freedom and defends the Electoral College at the Save Our States project.

of the College, its origins, how it functions, how it shapes American politics, and why preserving it is necessary to maintain our republican form of government.

Today, popular critiques of the system Hamilton praised is misunderstood, maligned, and the target of a state-based nullification campaign. How does the Electoral College system work? How does it influence our politics from top to bottom? And what might happen if the “National Popular Vote” interstate compact (of which California is a part) someday takes effect?

The Electoral College protects Middle America from rule by big cities. It limits vote fraud, contains disputes, and prevents a need for nationwide recounts. And it keeps states in charge of elections. The National Popular Vote interstate compact would eliminate these checks and balances.

When Alexander Hamilton spoke of the Electoral College, he said: “[If] the manner of it be not perfect, it is at least excellent.” Today, some are more doubtful, to say the least. The New York Times editorial board calls the system a “quadrennial ritual born in the economics and politics of slavery and the quill-pen era.” Some Americans want to move to a direct national election so badly that they have created an effort to do exactly that, but without a constitutional amendment.

The National Popular Vote effort asks state legislatures to award their electors to the winner of the national popular vote. If states holding a majority of electors comply, then the presidential election will operate as a national direct election. Under the Electoral College system, presidential elections are decentralized, taking place in the states. Moving to a popular vote would cater to the ideological extremes and corrupt our elections and would guarantee the Presidency to the candidate who receives the most popular votes in all 50 states and the District of Columbia.

Recognizing this threat to our republic, attorney and legal scholar Trent England created Save Our States in 2009. Working with author Tara Ross and election policy expert Sean Parnell, Save Our States became the only organized opposition to NPV.

Save Our States experts have testified at dozens of hearings and visited with legislators from Juneau to Augusta to Sacramento. They have convinced many legislators—even former sponsors of NPV—to become defenders of the Electoral College.

If not for the work of Save Our States, NPV would already have claimed control of presidential elections resulting in a constitutional crisis.

The bill has been enacted by 11 jurisdictions possessing 165 electoral votes—61% of the 270 electoral votes necessary to activate it, including four small jurisdictions (RI, VT, HI, DC), three medium-size states (MD, MA, WA), and four big states (NJ, IL, NY, CA). The bill has passed a total of 33 legislative chambers in 22 states—most recently by a bipartisan 28–18 vote in the Oklahoma Senate, a 57–4 vote in New York Senate, and a 102–33 vote in NY Assembly.

Is the Electoral College an antiquated institution or is it an essential element of America’s republican democracy? If the Electoral College needs to be replaced with a direct election system, is NPV an appropriate route to change? Or does its interstate compact constitute an end-run around the constitutional amendment process? All of these questions have been addressed by Trent England.

TRENT ENGLAND serves as Executive Vice President at the Oklahoma Council of Public Affairs, and a David and Ann Brown Distinguished Fellow for the Advancement of Liberty. He is an adjunct fellow of New Mexico’s Rio Grande Foundation and serves as the national coordinator for Liberty Foundation of America. He served as the Executive Vice President of the Olympia, Washington-based Freedom Foundation where he developed and directed the Foundation’s constitutional studies programs and Citizen Action Network.

He was also a candidate for the Washington State House of Representatives in 2006, a Publius Fellow of the Claremont Institute in 2008, and earlier served as a legal policy analyst at The Heritage Foundation, and was an opposition research analyst for a national campaign committee.

Trent formerly hosted morning drive-time radio in Oklahoma City and has filled for various radio hosts including Ben Shapiro. He is a producer of the feature-length documentary, Safeguard: An Electoral College Story; the author of Why We Must Defend the Electoral College; and a contributor to The Heritage Guide to the Constitution and One Nation Under Arrest.

Trent is a contributor to two books—”The Heritage Guide to the Constitution” and “One Nation Under Arrest: How Crazy Laws, Rogue Prosecutors, and Activist Judges Threaten Your Liberty.” His writing has also appeared in the Wall Street Journal, USA Today, Washington Times, Hillsdale College’s Imprimis speech digest, and other publications.

Trent holds a law degree from The George Mason University School of Law and a bachelor of arts in government from Claremont McKenna College. He lives in Oklahoma City with his wife and their three children.

He has five videos in the C-SPAN Video Library; the first appearance was a 2019 Debate as an Executive Vice President for the Oklahoma Council of Public Affairs. The year with the most videos was 2021 with four videos. Most appearances with Devin Nunes (3), Robert Lighthizer (2), Bob Beauprez (2). Most common tags: Republican Party, Electoral College.

Nov. 5, 2012 – The Electoral College Serves the Interests of All People

Recent May 19, 2021 – Senator Inhofe on Value of the Electoral College 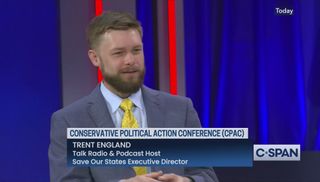 January 14, 2021 – What’s the True Agenda Behind the Movement to Abolish the Electoral College?

October 1, 2019 – The Electoral College Matters and Has Benefited Us

​May 16, 2019 – Hillary Deserved to Lose, The Electoral College Deserves to Stay.

September 29, 2020 – Even the Washington Post Admits NPV Would Not Create a ‘National Popular Vote’