Congress Needs to Make Changes to the Final NDAA 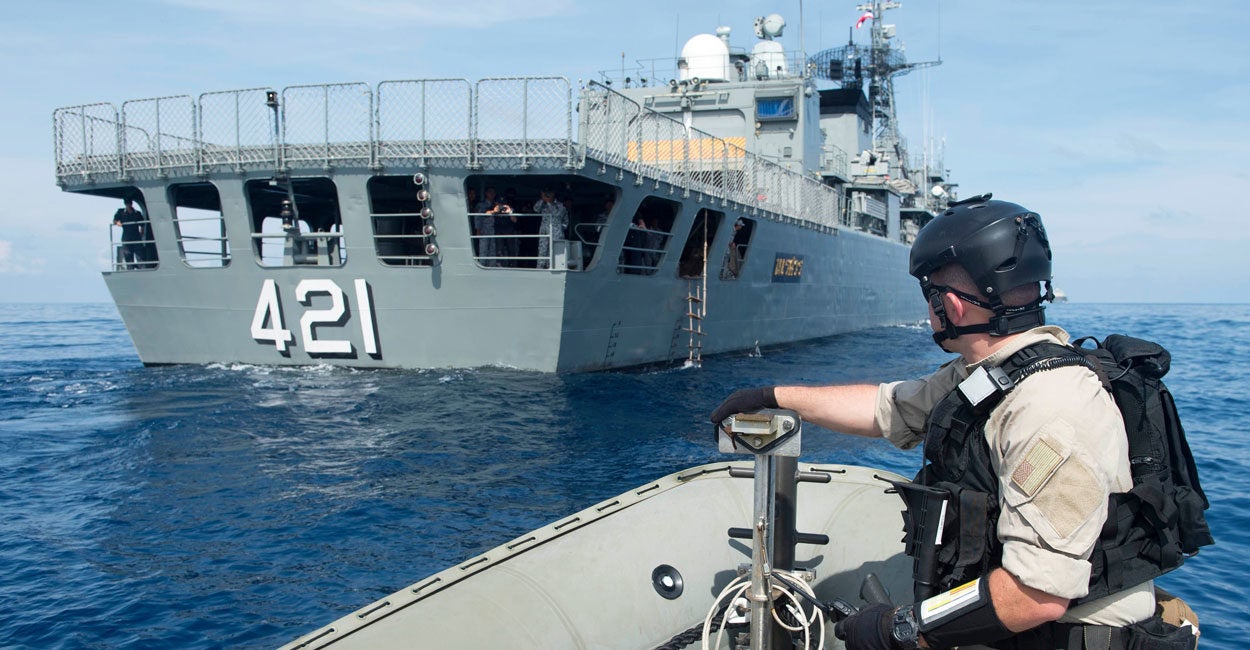 A U.S. Navy sailor from the littoral combat ship USS Coronado prepares to pick up Thai sailors from HTMS Naresuan for a visit, board, search and seizure exercise during the multilateral Cooperation Afloat Readiness and Training May 11, 2017 in the South China Sea. President Obama’s cuts brought the Navy fleet to the lowest it has been since 1915. (Photo: Deven Leigh Ellis/ZUMA Press/Newscom)

Hayden Morse is a member of the Young Leaders Program at The Heritage Foundation.

Frederico Bartels is a policy analyst for defense budgeting at The Heritage Foundation’s Davis Institute for National Security and Foreign Policy.

In June, the House and Senate passed their individual versions of the 2019 NDAA and started to conference to work on the differences in their bills. While both versions have laudable provisions, there is also room for improvement.

The NDAA is one of the few pieces of legislation that have passed reliably in the last 55 years and the 2019 version of the bill will set the trajectory of our current military rebuilding effort.

One good change is the increased funding for the Defense Department. Currently the base discretionary budget will go from $626.4 billion to $639.1 billion. The increase in funding will greatly help rebuild the U.S. military by funding important training, spare parts, facility sustainment, and purchases of critically needed equipment.

Another welcomed feature is the support of the findings of the Nuclear Posture Review, which will invest in the development of a low-yield, submarine-launched ballistic missile, as well as the continued modernization of the U.S. nuclear deterrent. Modernization is needed because the average age of U.S. nuclear warheads in 2015 was 27 years, and the last time we tested a nuclear weapon was 1992.Among the areas that should be reworked is end strength. The president requested the authority and funds to re-grow the military from the cuts made under the Obama administration. President Barack Obama’s cuts brought the Army to the smallest size it has been since 1940 and the Navy fleet to the lowest it has been since 1915.

The Trump administration requested a 24,100 active personnel growth to undo that. The House supported this in their NDAA but the Senate did not. The Senate wants to only increase the active personnel by 15,461 instead of 24,100. Each of the service chiefs have testified that their current force is too small to meet the demands of our National Defense Strategy. It is important we make sure the active force receives its full personnel request.

Another thing that needs to be changed is the procurement number of Littoral Combat Ships (LCS). The Navy requested one be made in 2019, but the House added two, totaling three for the year. The Senate, on the other hand, want more information on the program before committing. The goal should be the procurement of two in 2019, which would be enough to accurately fill the shipyards.

Further, the president did not request the next round of Base Realignments and Closures (BRAC). Nonetheless, as recently as 2017, the Pentagon identified BRAC as the single reform that carried the greatest potential for monetary savings, totaling as much as $2 billion annually.

The House version of the bill contains provisions for small-base closures when state and local officials agree. The provision is unlikely to be leveraged as these closures would also have to go through Congress, providing many veto points to prevent closures. The Senate version prohibits BRAC entirely.

BRAC is the best currently available mechanism for the Pentagon to manage their real estate and to cut unnecessary spending. Congress should use recommendations previously outlined to mold the next round of BRAC.

As lawmakers start to conference on the 2019 NDAA, they have the opportunity to further improve the legislation and make sure that the Department of Defense is getting the most value possible out of the taxpayers’ dollars. The 2019 NDAA can accomplish both of these tasks by following some of the recommendations outlined here.