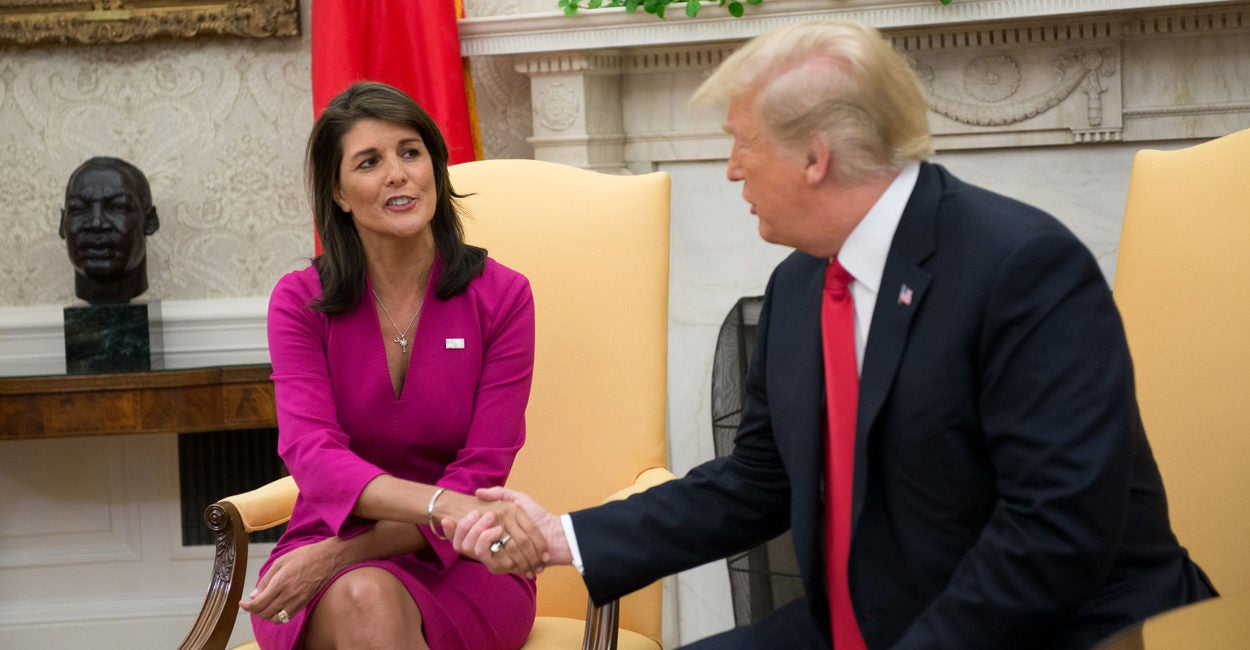 President Donald Trump thanks U.N. Ambassador Nikki Haley during their appearance Tuesday in the Oval Office of the White House to announce her resignation. (Photo: Erin Scott/Polaris/Newscom)

The Trump presidency has been full of surprises, but personnel changes typically are telegraphed or leaked well in advance. Nikki Haley’s announcement of her resignation as U.S. ambassador to the United Nations, however, was a genuine surprise.

A major player in the administration’s foreign policy and a revered figure among many conservatives, Haley said Tuesday morning from the Oval Office that she will leave the post at the end of the year after serving almost two years in the job.

President Donald Trump, sitting beside Haley, praised her time in office in what turned out to be a mutually affectionate going-away celebration.

“I wanted to do this because Nikki Haley, ambassador to the United Nations, has been very special. She’s done an incredible job,” Trump said. “She’s a fantastic person. It’s very important that she is also someone that gets it. She has been at the United Nations from the beginning with us.”

Here’s a look at key questions about Haley’s departure and her future.

The ambassador made clear what isn’t in her future.

“I will say this: For all of you that are going to ask about 2020. No, I’m not running for 2020,” Haley said. “I can promise you what I’ll be doing is campaigning for this one, so I look forward to supporting the president in the next election.”

When she said “this one,” she pointed a finger at the president.

But Haley, 46, elected South Carolina governor in 2010 and 2014, now has foreign policy chops that could make her a presidential contender, possibly in 2024, said Matthew Heiman, a senior fellow at the National Security Institute at George Mason University.

“There is no question she will move on to bigger and better things,” Heiman, a former national security lawyer with the Justice Department, told The Daily Signal. “She was quite clear she isn’t running in 2020, but she could be a future secretary of state if Trump is re-elected, or a presidential contender in 2024.”

In the interim, Haley, who has teenage children, could join a corporate board such as at Goldman Sachs, or become a university president, Heiman said.

“I strongly suspect she will take a break,” Heiman said. “I don’t think she’ll become the president of the University of South Carolina come January.”

This would fit in with how Trump described her decision.

Haley indicated a break might be in order after an eventful run as governor and ambassador.

“Now, I don’t have anything set on where I’m going to go. I think that the main thing was I was governor for six years and we dealt with a hurricane, a thousand-year flood, a church shooting, a school shooting,” Haley said. “That’s a lot, and then to come in and do two years of Russia, Iran, and North Korea.”

“It’s been an intense time and I’m a believer [in] term limits,” she quipped. “I think you have to be selfless enough to know when you step aside and allow someone else to do the job.”

The racially motivated Charleston church shooting in 2015 spurred Haley as governor to remove the Confederate flag from the South Carolina state Capitol.

As U.N. ambassador, Haley called out Russia for meddling in the 2016 U.S. election and was a prominent foreign policy adviser as Trump scrapped the Obama-era nuclear deal with Iran and prepared to meet with North Korean dictator Kim Jong Un.

2. Who’s Next as UN Ambassador?

Trump gave no clue as to who Haley’s successor might be, only a timeline.

“We have a number of people that would very much like to do it. It’s a great position, and Nikki realized it. She’s helped make it a much better position,” Trump said. “She made it a more glamorous position that it was two years ago. She made it a more important position.”

Trump said he will be talking to Haley and White House chief of staff John Kelly about her successor.

“I would say we’ll name a successor, I don’t know, within the next two to three weeks, maybe sooner,” Trump said.

One option would be to choose someone with a vast foreign policy portfolio who has worked in the National Security Council or the State Department. This would include Dina Powell, who was deputy national security adviser early in the Trump White House.

The other option would be a high-profile political figure such as Sen. Lindsey Graham, R-S.C., or Sen. Tom Cotton, R-Ark., both of whom have been strong voices on foreign policy, Heiman said.

“She is certainly a person I would consider,” Trump said later in the day when asked about Powell while departing the White House en route to Iowa. “She is under consideration. We have actually many names that are great.”

Some more far-fetched predictions include Ivanka Trump or Jared Kushner, the president’s daughter and son-in-law, both senior advisers. Haley praised both, as well as first lady Melania Trump, during her remarks.

In response to a question before boarding Marine One, Trump said he isn’t likely to name his eldest daughter.

“It has nothing to do with nepotism. But I want to tell you, the people that know, know that Ivanka would be dynamite … I would be accused of nepotism if you can believe it, right?” Trump said.

“I think Ivanka would be incredible, but it doesn’t mean [I would name her],” Trump said. “I would be accused of nepotism even though I’m not sure there’s anyone more competent in the world, but that’s OK. But we are looking at numerous people. It is interesting.”

The first daughter soon tweeted that she isn’t interested:

It is an honor to serve in the White House alongside so many great colleagues and I know that the President will nominate a formidable replacement for Ambassador Haley. That replacement will not be me.

Other speculation includes Jon Huntsman, the current ambassador to Russia, who served as ambassador to China during the Obama administration. Huntsman, a former governor of Utah, sought the GOP presidential nomination in 2012.

Other names in the mix are Under Secretary for Public Diplomacy and Public Affairs Heather Nauert, a chief spokesman for Secretary of State Mike Pompeo, and German Ambassador Richard Grenell, former head of communications for the U.S. delegation at the U.N.

“I doubt anyone outside the White House knows,” Brett Schaefer, the fellow in international regulatory affairs at The Heritage Foundation, told The Daily Signal. “It will be a combination of someone very capable and someone who the president trusts and has the trust of Secretary Pompeo and [national security adviser] John Bolton.”

Any nomination could be tough in this environment, Schaefer said.

“If the Republican majority is lower or there is a Democratic majority in the Senate, it’s very possible the nomination will be taken up in the lame-duck session,” Schaefer said, speaking of the time between the November election and the beginning of the next Congress.

Ambassador Haley has served America with dignity + distinction.
She is a bold reformer and has been an unwavering champion of truth, principled realism and integrity within the United Nations.
Jared and I are grateful for her friendship — a true blessing in our lives! 🇺🇸 pic.twitter.com/sidkwXzPZB

Both Haley and Trump seemed to want to stress that the parting is on good terms.

“There’s no personal reason, but I think that it’s just very important … for us to understand when it’s time to step aside and I have given everything I’ve got these last eight years, and I do think something it’s good to rotate in other people who can put that same energy and power into it,” Haley said.

“A lot of people are going to say there’s a lot of reasons why I’m leaving,” she said. “The truth is, I want to make sure this administration, the president, has the strongest person to fight. It was a blessing to go into the U.N. with body armor every day and defend America.”

Trump said the Oval Office press gaggle was the right way to make the announcement.

“I just want to thank Nikki, and I thought this would be an appropriate way of doing it, because when you write it down on a piece of paper that Ambassador Haley will be leaving and you say nice things, people say, ‘What’s going on?’” Trump said. “This is the right way to do it. When you really think somebody’s done a terrific job, this an appropriate way.”

Two years on the job is not out of the ordinary for a U.N. ambassador or other high-profile administration positions.

“As ambassador to the U.N., she was often the face of the administration’s foreign policy,” Schaefer said, particularly since Trump’s first secretary of state, Rex Tillerson, and his second national security adviser, H.R. McMaster, rarely spoke on the record to media.

Even some of Haley’s more high-profile predecessors were on the job as U.N. ambassador for a comparable amount of time.

Bolton, who Bush appointed to the post during a congressional recess and who never was confirmed by the Senate, served from August 2005 to December 2006.

Bush named former Sen. John Danforth of Missouri to the position from July 2004 to January 2005.

President Bill Clinton named Richard Holbrooke to the post, and he served from September 1999 to January 2001. Before that, Clinton’s U.N. ambassador was Bill Richardson, the future governor of New Mexico, who served from February 1997 to August 1998.

Haley noted some of the biggest accomplishments in her time on the international stage so far during the Trump presidency.

Trump chaired the U.N. Security Council for the first time this year during Haley’s stint as ambassador.

Haley condemned Syrian dictator Bashar Assad for using chemical weapons on his own people in that country’s civil war.

She spoke up against the U.N.’s anti-U.S. and anti-Israel bias. After the U.N. General Assembly reprimanded the United States for recognizing Jerusalem as the capital of Israel, she warned member nations about the consequences in U.S. aid.

In line with the president, Haley also pushed NATO allies to spend more on their military and supported the administration in negotiating trade deals with Canada and Mexico, making a South Korean trade deal, and in talks with the European Union.

“She was a tough leader at the U.N. and stood up to countries that were not acting in the U.S.’ best interest,” said Jamil Jaffer, former associate counsel for President George W. Bush and founder of the National Security Institute at George Mason University. “She has shown herself to be different from the president, but not in a way that got in his grill. Other Cabinet officials had trouble with that.”